James Forrest celebrated his new contract with a goal as Celtic beat St Mirren 2-0 at Parkhead.

The winger netted Celtic's second goal in quick succession just after the interval, hours after signing a one-year contract extension which ties him to the club until 2023.

The 28-year-old came closest to breaking the first-half deadlock as St Mirren defended in numbers and displayed good skill and composure to net in the 54th minute.

Mohamed Elyounoussi had opened the scoring five minutes earlier from close range as Celtic responded to three first-half goals from Rangers at Ross County to ultimately ensure they remain top of the Premiership by one goal.

Celtic handed Greg Taylor his long-awaited debut almost two months after his move from Kilmarnock and the left-back made a good contribution to their attacking play.

St Mirren were one point off the bottom at kick-off but their defensive record was not far off Celtic's with nine goals conceded in 10 matches, only two more than the champions.

Their ability to close down space in and around their penalty box presented the hosts with a challenge and Celtic were restricted to long-range efforts in the opening quarter with Ryan Christie coming closest with a dipping effort.

Saints were having their moments in possession, although their final ball normally let them down when they got into decent positions.

However, Jon Obika had a clear chance 25 minutes in when he brought down a long pass and held off Kristoffer Ajer. The striker got a left-footed shot away but it lacked power and Fraser Forster got down to save.

??? NL on @ScottBrown8: "He tweaked his thigh. He came off straight away. We will assess him tomorrow but we didn't want to take any chances. We'll see how he is overnight." #CELSTM #SPFL

Celtic's biggest first-half threat appeared to be from corners and Christopher Jullien twice came close. The French defender headed over from six yards after beating Vaclav Hladky to Christie's delivery and saw another header cleared off the line by Ryan Flynn.

Christie appeared to be pulled back by Stephen McGinn as he prepared to meet a clever low delivery from another corner.

The visitors continued to crowd out Celtic in front of their goal but Forrest came close on the stroke of half-time when he got a yard of space and saw his shot touched onto the near post by Hladky.

The opener came after Odsonne Edouard used his quick feet to bypass the crowd of pink and black shirts in front of him. 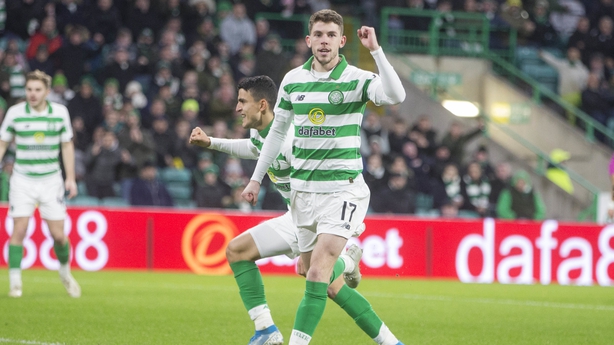 The Frenchman collected a pass from Scott Brown, shifted his feet and curled a shot off the inside of a post. Christie made a hash of the rebound but the ball ricocheted kindly for Elyounoussi, who tapped home from close range.

Forrest doubled the lead after good close control in the box, taking a pass and finding an angle to slot into the far corner from 14 yards.

With St Mirren having netted only five times in their first 10 league games, the quick-fire double made it mission impossible for Jim Goodwin's side, but Celtic did not kick on, although they created several more openings.

Elyounoussi had a shot blocked from a good opportunity and Edouard skied a simple chance following good work from Forrest.