The visitors, playing their 20th game of the season, trailed to Jamaal Lascelles' first-half header, but dominated the second half and got their reward when the Spanish midfielder levelled from close range with 17 minutes remaining.

It was no more than they deserved on an afternoon when the Magpies, who had Sean Longstaff sent off eight minutes from time for a challenge on Ruben Neves, wilted after looking likely to build upon their lead in a promising conclusion to the first half in front of 46,019.

Wolves, now unbeaten in eight games in all competitions, enjoyed the greater share of possession in the early stages, but rarely threatened Martin Dubravka's goal despite a series of crosses from dangerous winger Adama Traore.

Joao Moutinho forced Dubravka into a regulation second-minute save with a bouncing shot from 20 yards, but he was otherwise largely untroubled.

Newcastle created even less in the early stages with Miguel Almiron slashing a fifth-minute attempt across goal after Joelinton had headed down Longstaff's free-kick.

However, as winger Allan Saint-Maximin started to force his way into the game, he saw a 19th-minute effort blocked at source after a fleet-footed run down the right, and Wolves skipper Conor Coady got his head to DeAndre Yedlin's cross just before Joelinton could pounce four minutes later.

Almiron wasted a rare opportunity when he broke from deep inside his own half with support from Yedlin, Saint-Maximin and Joelinton, but could only pick out Coady with his pass. 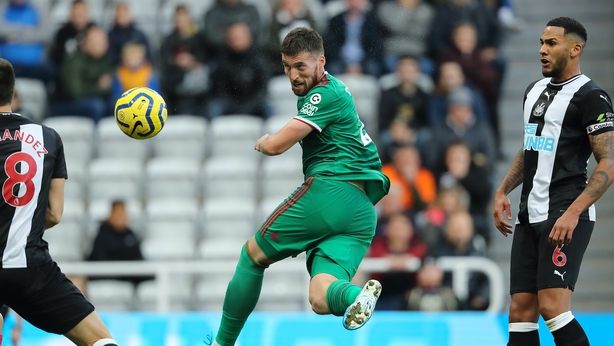 The Paraguay international, still awaiting his first Magpies goal, fired into the side-netting from a narrowing angle after outpacing the visitors' rearguard with 11 minutes of the half remaining.

However, the home side took the lead three minutes later when Federico Fernandez recycled Longstaff's half-cleared cross and picked out fellow central defender Lascelles, who glanced the ball past the helpless Rui Patricio at the near post.

Diogo Jota flashed a 57th-minute header high over from Traore's driven cross and the fast-arriving Matt Doherty failed to collect Raul Jimenez's clever ball into the box seconds later with the visitors stepping up a gear at the start of the second half.

Dubravka had to hack away Traore's low cross at his near post after the winger had tricked his way through the cover, then had to be at his best to repel Jota's 64th-minute effort after the striker carved his way into the penalty area.

However, the Slovakia international was found wanting with 17 minutes remaining when he could only palm Doherty's cross to Jonny, who rifled the ball into the unguarded net.

Jetro Willems blasted a 76th-minute shot just wide of the far post and then headed straight at Patricio but Newcastle's hopes of a late winner were effectively ended by Longstaff's premature departure - and Doherty headed agonisingly across the face of goal in stoppage time.