Ralph Hasenhuttl apologised to Southampton's fans and took full responsibility for the "disaster" of being thrashed 9-0 by high-flying Leicester on a historic night of Premier League action.

Hat-tricks from Ayoze Perez and Jamie Vardy paved the way for the rampant Foxes to equal the biggest win in Premier League history and inflict the worst loss in Saints' 134-year existence.

Goals from Ben Chilwell, Youri Tielemans and James Maddison contributed to an astonishing scoreline at St Mary's as Brendan Rodgers' visitors climbed to second in the table.

Saints left-back Ryan Bertrand also made history by becoming the first top-flight player to be sent off following a VAR review after a dangerous lunge at Perez in the build up to Chilwell's 10th-minute opener.

The early dismissal undoubtedly had a significant impact on the home side's fortunes but it could not excuse the embarrassing capitulation which followed, leaving Saints manager Hasenhuttl to take the blame.

"My reaction is that I must apologise for this performance. I take 100% responsibility for what happened today," said the Austrian.

"This was absolutely no-go in any way and I want to say that I am proud of the fans - they were staying in the stadium until the end of the game - because it was not easy to watch it for anybody who is following us.

"I think they did it quite well until the end to stay here and to stay with us. We have to apologise for what happened today and stand up again.

"In my entire life, I haven't had a game like this and I also thought that this cannot happen. It's 12 or 13 years now as a head coach and it was an experience I never had in my life so far." 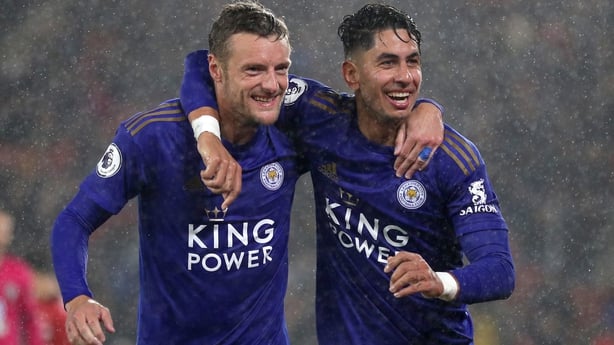 At his pre-match press conference, Hasenhuttl called for his side to grind out a "dirty win" to give their success-starved home supporters a first win on home soil since mid-April.

But even before the drama of the opener and Bertrand's deserved dismissal, the in-form Foxes appeared to be a cut above.

Hasenhuttl said an inquest into the embarrassment would have to wait.

"I think it's not the moment to go into details now. Everybody saw what happened today and, after the red card, every attack was a goal, nearly," said Hasenhuttl.

"There was no defending at all. If they didn't pass the pass, we did it for them. When you act like this, you cannot be surprised about conceding nine goals."