Derek Pender bowed out in fitting fairytale glory with the winner from the penalty spot as Bohemians came from behind to give their inspirational captain the ideal retirement gift.

With their return to Europe for the first time in eight years confirmed last week, this proved a celebratory finale to the season for Bohs, securing third place in the SSE Airtricity League Premier Division table as they bade farewell to right-back Pender, 35, after a 17-year long career.

In front of a packed main stand, Bohemians started purposefully, Paddy Kirk bursting into attack from left-back to drive a shot wide across Luke McNicholas' goal four minutes in.

Not before the Gypsies had had a scare in the second minute. A mistake by Keith Buckley gifted Kris Twardek a sight of goal with the Bohemians midfielder relieved to see the shot arrow wide.

Subdued by a lack of goalmouth action, the home crowd warmed to Danny Mandroiu working space to shoot off target just before the half hour as the game struggled to ignite.

And it was Sligo who soon provided that spark on 31 minutes with a goal out of nothing.

Twardek skipped clear of Kirk on the right to whip over an inviting cross for the in-rushing Daryl Fordyce to stretch out a leg and poke the ball past the flatfooted James Talbot.

It might have been 2-0 a couple of minutes later as left-back Lewis Banks was presented with a clear shot on goal inside the area only to see his weak effort go straight into the hands of the Bohemians goalkeeper.

Sloppy home defending was given a further let-off on 40 minutes.

Banks worked a one-two with Fordyce to get in behind on the left to cross.

Kirk did well to block the initial shot from Twardek with Fordyce blasting the rebound over the top when he should have done better.

Sligo's defending was tenacious at the other end a minute before the break with brave blocks on shots from Mandroiu and Buckley.

Danny Grant was then inches from levelling in first half stoppage time as he watched his flick from Pender’s cross go wide off the angle of the cross bar and post.

Though Bohemians came out on the front foot, it was Sligo who created the first opening of the second half on 55 minutes.

Fordyce again was the danger man, getting his head to a Niall Morahan cross to work Talbot.

Keith Long’s side needed something special to get back into the game and it duly arrived on 58 minutes. 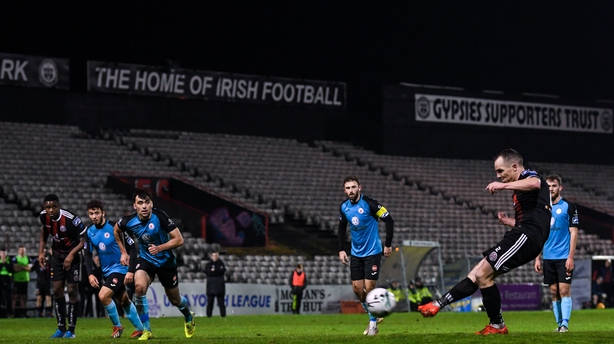 Grant was upended by Johnny Dunleavy on the edge of the area. Mandroiu did the rest, curling his right-footed free kick up and over the wall and in off McNicholas’ right-hand post.

Then came Pender’s moment on 81 minutes. The Sligo keeper had fouled Andre Wright to give away the penalty.

And there was only one man to take it as Pender stepped up and duly sent the Sligo keeps the wrong way to lift the roof off the Jodi Stand.