After losing at Sheffield United on Monday night, Emery launched an impassioned defence of his tenure as Gunners boss on the eve of the Group F clash - but what followed was as below-par performance rescued by the brilliance of his £72m man, who struck a fine brace to earn a 3-2 win.

Without a goal from their first two games and with no away win in Europe since 2005, Vitoria stunned the Emirates Stadium as former Tottenham winger Marcus Edwards opened the scoring before Bruno Duarte restored the lead following Gabriel Martinelli's equaliser.

With more than one 'Emery Out' banner displayed and the crowd singing for Mesut Ozil - again absent from the matchday squad - it was clear Emery's calls for patience from supporters had largely fallen on deaf ears but the stadium erupted as Pepe curled in two wonderful free-kicks in the final 10 minutes.

Vitoria - with a lengthy injury-list and resting some players ahead of Sunday's Primeira Liga clash at Sporting - will ultimately leave London disappointed that they failed to secure a point, let alone the three they looked destined for.

Andre Almeida had a good early chance to put the visitors ahead as he turned Rob Holding with ease before a tame strike at Emiliano Martinez.

But Arsenal did not heed the warning and fell behind soon after as Almeida got the better of Kieran Tierney before squaring for ex-Spurs man Edwards to coolly control and slot home. 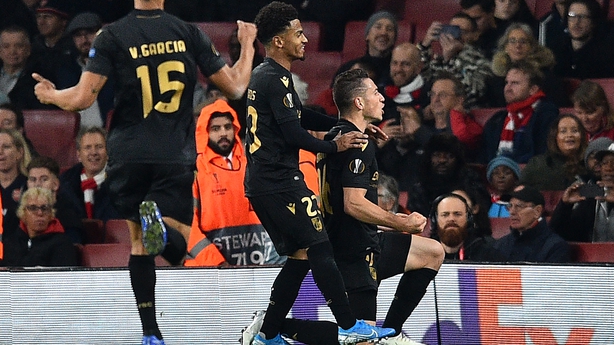 Alexandre Lacazette, starting for the first time since undergoing ankle surgery, scuffed a shot wide as the Gunners looked for an immediate response - but it was Vitoria who were still enjoying the majority of the possession.

Emile Smith Rowe's jink and shot was deflected behind but it was Davidson who skied a fine chance to double Vitoria's lead as he was picked out from a routine free-kick.

Martinelli, who scored twice in the win over Standard Liege in Arsenal's last outing in this competition, failed to connect with a Hector Bellerin cross at the near-post as the home side finally came to life at the half-hour mark.

But he would make amends moments later as, with Vitoria goalkeeper Miguel Silva wandering off his line, he headed home Tierney's cross to equalise.

For all their battling to get back into the game, Arsenal soon allowed their Portuguese visitors to regain the lead as Ainsley Maitland-Niles was robbed of possession by Davidson, who broke forward and hit the post before Duarte thrashed home the rebound.

More than a smattering of jeers greeted the half-time whistle and Emery responded to the first-half performance by introducing both Matteo Guendouzi and Dani Ceballos at the break.

Shkodran Mustafi headed wide early in the second-half before Martinez had to be at his best to keep out Denis-Will Poha's close-range effort.

Smith Rowe was then guilty of skewing a shot wide when well-placed as Arsenal, much like in Monday's defeat, toiled to create chances to salvage a result. 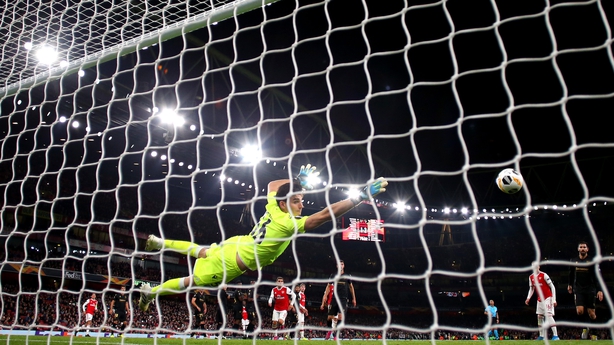 That was until Emery turned to club-record signing Pepe with 15 minutes to go as he replaced the ineffectual, and clearly unfit, Lacazette.

That saw the flow of the game change as Martinelli was denied by Silva, who then did well to hold onto Holding's downward header - but there was nothing he could do to prevent Pepe stealing the headlines with an injury-time free-kick - with Emery the only man involved with Arsenal not hitting the roof at the winning strike.