While Declan Devine’s side are still in the driving seat for that European place, as they only need a point against Finn Harps on Friday night, the win for the Saints sees them move to within two points behind the Candy Stripes going into this week’s finale. 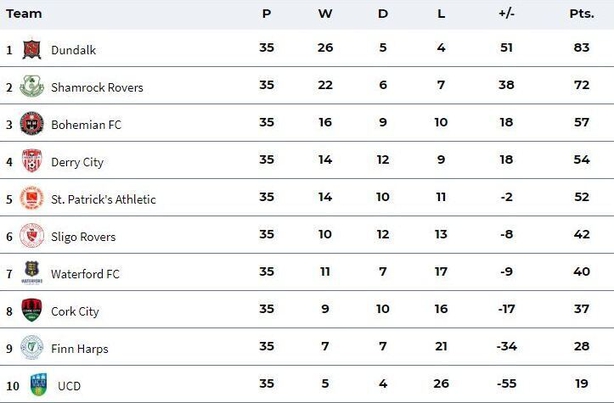 The home side went close to taking a second-minute lead as David Parkhouse's left wing cross to the back post found Ally Gilchrist, but his header was tipped over the bar by Saints keeper Brendan Clarke.

St Pat’s had a good chance themselves on 15 minutes but Ciaran Kelly, header over from close range.

In what was a poor first half, where neither Clarke or Peter Cherrie were really tested, the visitors should have done better right at the start of the second period.

Derry broke the deadlock on 52 minutes after a quick fire move, which cut through the visitors as Ciaran Coll broke the offside trap down the left before calmly squaring the ball to an unmarked Parkhouse, who gleefully side footed home from close range.

The home side’s lead only lasted eight minutes as a poor clearance by Eoin Toal fell to Chris Forrester and the ex-Aberdeen man made no mistake, drilling the ball low into Cherrie’s bottom right hand corner.

The Dubliners went ahead on 79 minutes as substitutes Jake Walker and James Doona combined to put them in front, as more poor defending by City resulted in Doona racing clear to fire home.

Saints sealed the win on 83 minutes as they caught Derry on the counter attack when the Walker and Doona combination worked a treat, before the winger cut past Jamie McDonagh before firing home his second of the night.