And so, once again, it comes down to Denmark. Ireland have lost 2-0 in Switzerland meaning we must win our final Group D game to qualify automatically for next summer's Euros.

Two years and four days after Age Hareide's men obliterated our World Cup dreams, they will return to Dublin intent on repeating the trick, albeit this time we will almost certainly have the safety net of the play-offs via the Nations League if we're beaten.

Ireland produced a spirited second half in Geneva but were again wasteful in possession and devoid of any genuine invention. Here's how we rated the Boys in Green.

He had a bit of a slip on the sodden turf when booting one upfield very early on but thereafter Randolph was his usual excellent self. Made one good stop from Granit Xhaka's awkward 25-yarder, then tipped over Haris Seferovic's fierce header in the second half and he topped both with that magnificent penalty save from Ricardo Rodriguez. Ireland have thee fine young keepers coming through - Caoimhin Kelleher, Mark Travers and Gavin Bazunu - but they'll all be kicking their heels as long as the ever reliable Randolph is around.

One to forget for the skipper. The wing-back role he'd been tasked with was was binned by McCarthy halfway through the first half and that actually allowed Coleman to be more effective going forward. He got sucked into a running battle with Rodriguez and Breel Embolo and had a few rush-of-blood-to-the-head moments when things got needly. Tried to beat the powerful Embolo in his own half at least three times and lost out. A massively frustrating night was compounded by the concession of the penalty for a handball, which earned him a second yellow and ruled him out of the Denmark game.

The big Derryman holds this Irish back line together, always seems to be in the right place at the right time and gives us a serious aerial threat in the opposition box. The own goal at the death was unfortunate - more frustrating was the fact he had played Embolo onside in the build-up to it. Still, Duffy is crucial to 'Mission Aviva' next month. He produced another commendable showing tonight.

In the last few weeks Egan's gone from battling Richard Keogh for the right to line up alongside Duffy, to being a crucial defensive linchpin for Ireland. He's formed a very decent partnership with the Brighton centre-half the last two games and looks comfortable at this level. Like Duffy, we need him fit and healthy to keep the dream of automatic qualification alive.

Back from suspension, Stevens hardly put a foot wrong in a composed and disciplined showing. He offers Ireland balance and solidity in that left-back spot even if he occasionally could have done a bit more in the home half. 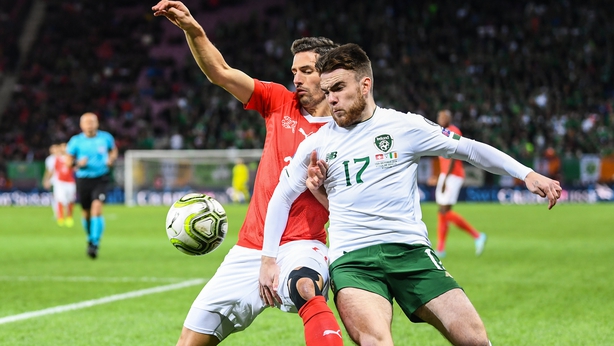 The 19-year-old is a sparkling talent and it says everything about the impression he's made in his first senior camp that McCarthy made him his attacking focal point for a good chunk of the 70 minutes he was on the pitch. Full of running, if occasionally naive, he'll have learned loads from this high-stakes encounter. Deserves another chance against Denmark.

Had his pocket picked in the build-up to Xhaka's sixth-minute strike, then got harshly booked after rising with Lichsteiner to challenge for a header. Toiled all night but Ireland needed Browne or Jeff Hendrick to be far more efficient with the ball in the middle of the park. Neither rose to the task.

Lost out on the header that led to Haris Seferovic's well-taken opener and was shifted around more than he looked comfortable with by the movement of Seferovic and Embolo in the first half. Whelan never stops trucking though - his brief is to shield the back line and for the most part he did it well, producing one outstanding block late on.

He was poor in possession against Georgia and struggled again tonight. Hendrick looks zapped of confidence when he turns up for his country these days. Never stopped running but the amount of cheap ball he coughed up tonight - and against the Georgians - hurt Ireland in the engine room. 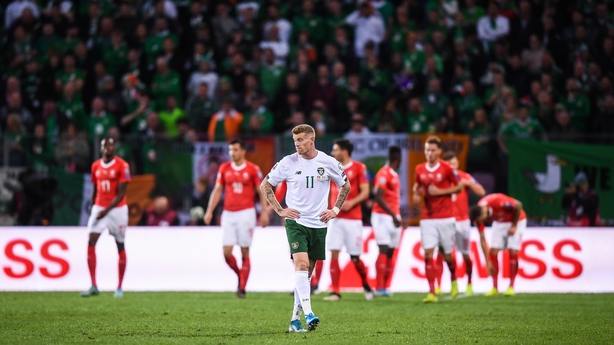 Gave up a needless foul on Stephan Lichtsteiner two minutes in, which Granit Xhaka wasted, and looked over-eager in those early stages. McClean had a bad game in Tbilisi; this was an improvement, but it was another performance where he managed to burn up energy without really making a positive impact.

The Luton Town man emptied the tank up front, feeding off scraps for the most part but he was sacrificed at the break as McCarthy changed things around. He's honest as the day is long but Collins is a limited operator at this level. Ireland looked slicker once Connolly was deployed as the side's most progressive attacker.

Stationed on the right wing with Connolly moved up top and offered composure on the flank. He was at the heart of Ireland's best period of the game, a 15-minute burst where they turned the screw on their hosts. Faded thereafter but this was a bright cameo.

Scott Hogan for for Connolly (70 mins) 6

He was unfortunate in that Ireland went down to ten men minute six minutes after he entered the fray. Barely got a sniff of anything resembling decent service in areas he could have hurt the Swiss.