Russia and Poland sealed their places in the Euro 2020 finals with victories over Cyprus and North Macedonia respectively.

Two goals from Denis Cheryshev helped Russia to a 5-0 win in Nicosia which ensured they will join Belgium in qualifying from Group I.

Cheryshev and Magomed Ozdoyev swept the visitors into an early lead and Cyprus' fate was effectively sealed after Konstantinos Laifis was sent off just before the half-hour mark.

Earlier Belgium, who had already qualified for the finals, won 2-0 in Kazakhstan with goals from Michy Batshuayi and Thomas Meunier.

Poland earned the win they needed to qualify from Group G as late goals from Przemyslaw Frankowski and Arkadiusz Milik sealed a 2-0 win over North Macedonia.

A first-half goal from Stefan Posch helped Austria preserve second place in the same group with a 1-0 win in Slovenia, who had substitute Denis Popovic sent off in the 89th minute.

Germany shrugged off an early red card for Emre Can as they moved closer to qualifying from Group C with a 3-0 win in Estonia.

The Juventus midfielder was issued a straight red card for preventing a clear goalscoring opportunity in the 14th minute.

And his side had to wait until the 51st minute to make their breakthrough before two goals in six minutes from Ilkay Gundogan secured victory, with Timo Werner adding a third on 71. 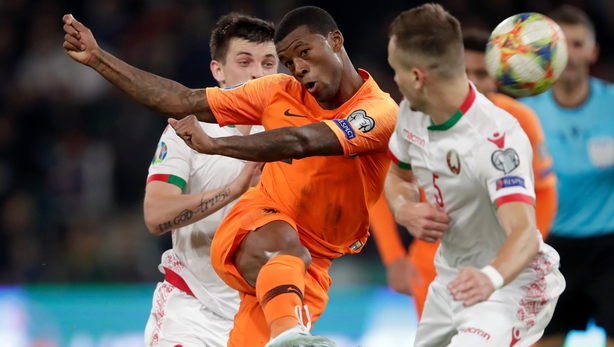 Holland need only a point against Northern Ireland next month to also ensure qualification after they claimed an unconvincing 2-1 win in Belarus.

Georginio Wijnaldum hit a first-half double but the Dutch failed to build on their advantage and faced a nervy second period after a 53rd-minute effort from Stanislaw Drahun.

Group E leaders Croatia were held to a 1-1 draw by Wales in Cardiff, with a brilliant Gareth Bale strike cancelling out an early effort from Nikola Vlasic.

Second-placed Hungary capitalised on the Croatians' failure to claim all three points as a goal from Mihaly Korhut gave them a 1-0 home win over Azerbaijan.

John McGinn scored a hat-trick as Scotland, who still have hopes of qualification due to their Nations League performance, ended a run of four straight losses in Group I with a 6-0 win over San Marino.