Northern Ireland manager Michael O'Neill hit back at Ronald Koeman after the Holland coach called his side's style "outrageous" and "terrible to watch".

Koeman strongly criticised Northern Ireland in comments given to Dutch TV station NOS in the wake of Holland's come-from-behind 3-1 win in Rotterdam on Thursday night, secured with two stoppage-time goals.

That left O'Neill far from impressed after a match in which his side took the lead in the 75th minute before Memphis Depay inspired a late fightback for the hosts.

"We didn't go there to entertain Ronald Koeman, that wasn't the purpose of what we did," he said.

"It's irrelevant to me. You give respect to the opponent and how they play.

"If you're picking players from Barcelona, Juventus and Liverpool you can play a certain way. If we were so terrible why were we so difficult to beat? And clearly we were extremely difficult to beat.

"It's disappointing that a manager of that class feels the need to say that. It's not something we need to dwell on." 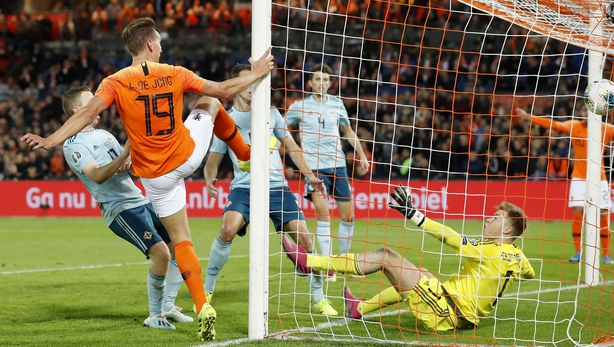 O'Neill said he was yet to watch Thursday's defeat back, which had left some raw emotions as Northern Ireland watched their Euro 2020 qualification hopes all but disappear in the space of 15 minutes.

A win would have left Northern Ireland needing a draw against the Dutch in Belfast next month while a draw would have kept them very much alive.

But the defeat now means they have only the faintest of hopes of escaping Group C and are instead looking to the play-offs.

"I haven't watched the game back," O'Neill said ahead of Monday's friendly against the Czech Republic in Prague.

"Of course we'll do that for November but it's not relevant for this game.

"The nature of how we lost, not only the timing but the nature of the goal, it was a very fortunate goal for (Luuk) De Jong, to get a second opportunity and put the ball in the net when he mishit his first touch...it was very cruel.

"I don't think we deserved it but we have to accept it, move on and make sure we do well in the game tomorrow to be ready for November."

The process begins with a friendly against the Czech Republic, a side buoyed by Friday's upset of England. Gareth Southgate's side lost 2-1 in Prague to suffer their first qualifying defeat in a decade.

"They are obviously more experienced and we very impressed by what we saw in the game on Friday night, having watched it back last night," O'Neill said.

"That's good, it will be a stiff test for us, their coach may make changes and do things as well. The main thing is that both teams get what they want from the game."

The odds will perhaps be against Northern Ireland, without an away win in a friendly since 2006, but O'Neill is expected to field a strong side having initially indicated he could make sweeping changes.

"It's a good decision to let them to go the under-21s as opposed to possibly playing a tiny part of this game," O'Neill said.

"It will strengthen Ian's hand as he's had one or two injury problems.

"The mood is good. We took the players out for dinner in Rotterdam on Friday night and that was good and it lifted the mood."