Mick McCarthy tried to put a positive spin on the stalemate in Tbilisi, but it was clear that the Ireland manager was not happy with his side's performance at the Boris Paichadze Dinamo Arena.

"Point gained…still unbeaten…if you’d offered me four points against Georgia…the keeper has not had a save to make…" – just some of the soundbites that the manager threw out after the game, but with such a tough test awaiting on Tuesday, McCarthy knows that his side have work to do.

There were positives of course; Shane Duffy’s return shows how vital his presence is in the middle of the defence, James Collins put in a shift up front on his competitive debut with little support coming from the midfield three, while even 11 minutes of Arron Connolly's endeavours shows that the striker is a real prospect for both club and country.

Ahead of the game, the manager spoke of his intention to nullify their possession play by keeping hold of the ball, however, that tactic never materialised.

Ireland were wasteful in possession and often left great big gaps for Georgia to play through and capitalise on sloppy Irish play.

And speaking after the game at the post-match press conference, McCarthy admitted that he was disappointed with how his side played when in possession.

"I think we could have been better with the ball. We won it a lot and then gave it back, so that disappoints me," said McCarthy.

Ireland line-out without a number 10, as Jeff Hendrick and Conor Hourihane are expected to link up play between midfield and attack, while wide men James McClean and Callum Robinson should also come in off their respective flanks to help out and vary the approach.

Very little of such play materialised as Ireland found it difficult to hold onto possession, and the manager said that the onus was on the whole team to be confident on the ball in such areas.

"It is a collective responsibility to keep the ball," said McCarthy.

"I think they all have to be comfortable with the ball and keep it as a team.

"Unfortunately some of their best chances came from us giving it away and for some reason, trying to slow the game down.

"We played far better when we played the game in their half and we turned them around and had good opportunities to make chances."

McCarthy also admitted that as the game entered the final 20 minutes his mindset was more focused on securing one point than snatching all three, which was evident from his first substitution as Alan Browne was sent on for Callum Robinson.

The Preston man did help shore up midfield after he came on in the 73rd minute, while Hendrick was sent out into a wider position.

"They were having a fair bit of play in the middle of the park, and I certainly wasn’t going to lose the point," said McCarthy.

"But Jeff Hendrick can play there," explained the manager in relation to moving the Burnley man out to the right side.

"He can make runs from there and he can get in the box, and he did actually and ended up with a shot that hit the side-netting.

"I’m very conscious of [not losing a point], especially when you are away from home."

We were worried about the pitch in Japan, but Aaron Connolly's big chance spoiled by a bobbly surface in Tbilisi #GEOIRL #rtesoccer https://t.co/yAeO7O0Klr pic.twitter.com/2leWJjZOjN

Teenager Connolly did come on and make a real difference in attack for the final ten minutes, and while the manager said after the game that he could possibly have put him on earlier, he added that he does not look back and regret substitutions following the game.

McCarthy made a point of outlining the contribution that Collins made up front, as he worked hard for the side at both ends of the pitch and remains in the picture to keep his place for Tuesday’s game against Switzerland.

"I make the substitutions as I see fit. I don’t look back and regret that I might have done it sooner. I was happy with [Collins’] contribution.

"I was conscious of making sure that we could defend free-kicks and corners, and James had a right old scrap up there, and was also defending the six-yard box. They were a right old threat, they were a big team.

"He fought with the two centre halves and we picked up a lot of the second balls – what we didn’t do is do enough from that second ball.

"I just thought we might nick it with him. He has done really well and has put himself in a place to play on Tuesday."

Despite praising Georgia ahead of the game for their ability to hold onto the ball and play attacking football, one aspect of the home side’s game that may have caught the manager unawares was the endeavour shown competing with Ireland in the physical battle.

"Right from the start when they rattled into a challenge on Jeff, they knew what was coming and they responded in kind.

"They stopped us. Each and every player was trying their best that they could. And you have to give the opposition credit for that.

"And we will want to play better than that in Switzerland, and we have done over the course of the campaign." 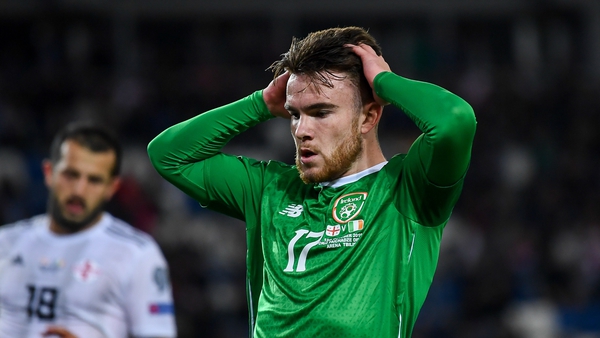