Not a game that will live long in the memory, but the 0-0 draw in Tbilisi keeps the Republic of Ireland on course for Euro 2020 qualification.

The visitors appeared content from the outset to take a point, and aside from the final five minutes, Mick McCarthy's side were flat and unconvincing, though Georgia themselves gave Darren Randolph little to worry about.

It is telling that Ireland's best two players were arguably the centre-halves, while Aaron Connolly offered us a glimpse of what he is about and had two late chances to snatch victory.

The draw takes Ireland to 12 points in Group D with three wins and three draws going into the final two qualifiers. 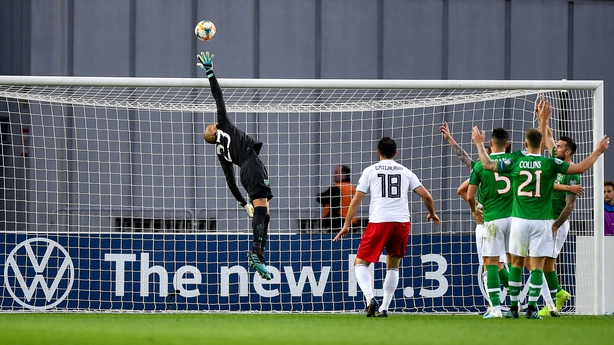 Wasn't called into a lot of action, but that was more down to poor shooting from the hosts than anything else. It isn’t the first time we have seen Georgia look comfortable on the ball but fail to punish opposition as they concluded the 90 minutes without a single shot on target.

The captain was the more attack-minded of the two Irish full-backs and seems to be building up something of an understanding with Callum Robinson. As ever, worked tirelessly throughout, from over lapping runs to scampering back to cover Georgia counter attacks. The second period was firmly a defensive effort and got into a spot of bother late on when he was out-muscled on the edge of the box as the hosts went in search of a winner. 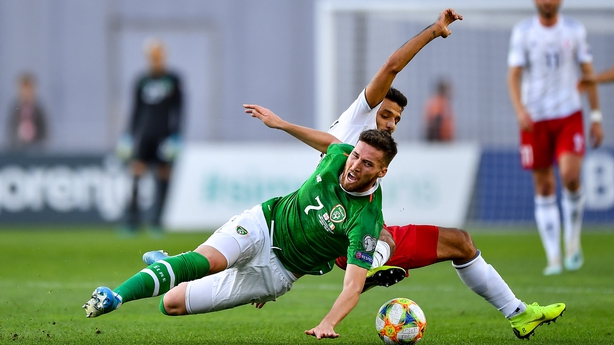 Found himself in somewhat unfamiliar territory on the left flank and was caught out early in the first half with a quick one-two that ultimately resulted in a feeble Georgian shot. A nervy moment followed minutes later when Tornike Okriashvili flung himself to the ground in the box but the contact, if indeed there was any, was minimal. Conor Hourihane didn't offer as much protection ahead of him as he would have liked, often drifting infield. Only one marauding run of note from the 27-year-old and doesn't look as comfortable on his weaker side. 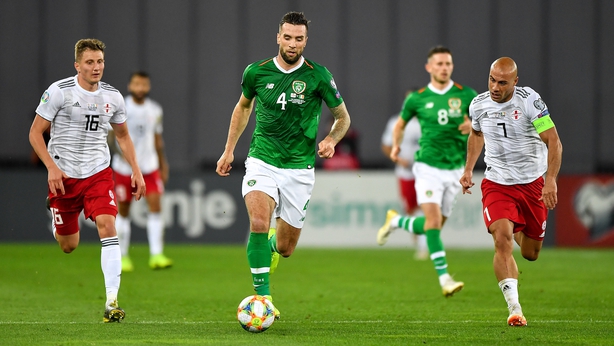 Got his wires mixed up early on when trying to play the offside trap from too deep a role, but quickly resumed his commanding role in the heart of the defence. Got through his customary number of blocks, sliding tackles clearing headers, but at times is let down by his distribution. The final act in the game was Duffy's towering header from a Hendrick's corner that was smothered on the line by the Georgian goalkeeper.

Nearly marked his sixth international appearance with a goal. The game was just four minutes old when his glancing header from a Conor Hourihane delivery came back off the upright. It turned out to be as close as Ireland would come to a breakthrough. Coped with everything that came his way, with one or two vital headers, and can reflect positively on his first competitive start. 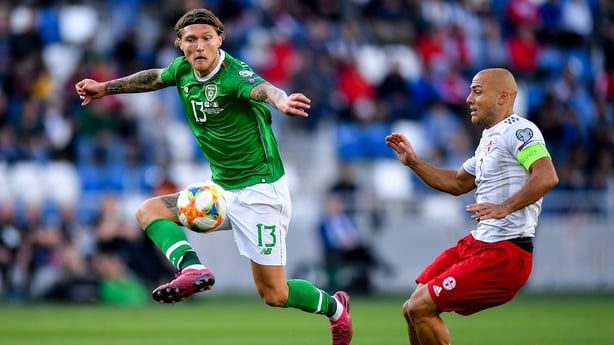 Began brightly and was often the primary midfield outlet for his defenders. A number of silky touches were balanced by careless moments in possession and was unable to increase the pedestrian Irish tempo in the opening 45 minutes. Drifted out of the game from an attacking point of view, though a volley that hit the side netting in the 76th minute was a rare Irish foray into the Georgia box. 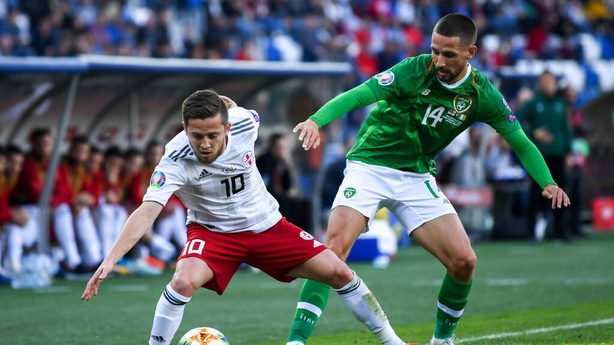 Georgia’s domination of possession was typified by their ability to sweep the ball through midfield where the Irish trio were pegged back and at times chasing shadows. The Aston Villa man was given the left-sided berth and his passing was not as crisp as we have come to expect.

The disciplined Hearts man was not surprisingly the deepest lying midfielder and offered protection to Duffy and Egan. A vocal presence on the pitch, constantly marshalling those around him. Badly caught for pace on a swift Georgian attack that resulted in the 35-year-old picking up a caution.

Skirted around the periphery off the game before playing his way into it. Began out wide but with Ireland struggling to get a foothold in the opening 45 minutes, drifted into a more central position. Was starved of decent delivery, but showed his danger with a few teasing crosses. Probably Ireland’s biggest attacking threat on the evening, which admittedly was a sparse shortlist, but was an anonymous figure after the break. 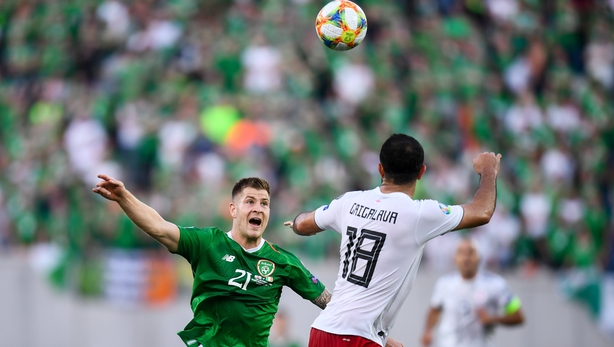 Mick McCarthy put his faith in the towering forward with his first international start, but Collin's role transpired to be more about closing down opponents than anything on the front foot. In truth, there was little more he could do and was an isolated figure for his 78 minutes on the pitch. Fortunate to escape a yellow card for a rash tackle and the introduction for Aaron Connolly offered a different threat as he stretched the Georgian defence. 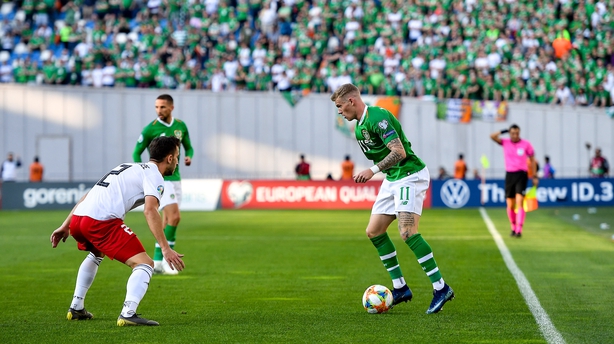 Cut a frustrated figure early on, with a number of wayward crosses and heavy touches. A sloppy pass for Glenn Whelan resulted in a quick counter-attack where Valeri Qazaishvili should have at least hit the target. Had Georgian goalkeeper Giorgi Loria in a spot of bother upon the resumption of the second half when he made a bags of a speculative cross. One of those games where very little went right for Derry man, remonstrating with team-mates as his frustrations increased.

Slotted into a central midfield role. Dutifully tracked Georgian runners, foiling Otar Kiteishvili when he let fly from distance. Sloppy in coughing up possession on one occasion before Shane Duffy mopped up. 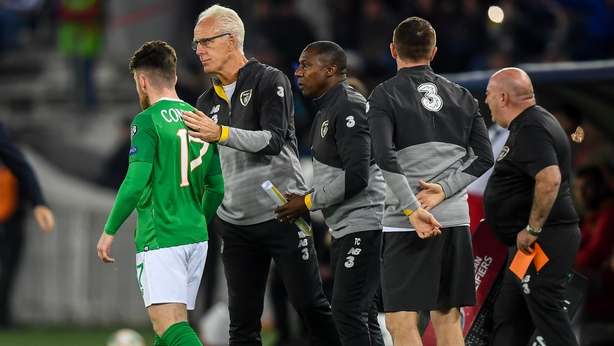 What a week for the Oranmore teenager, and it could have been even better. Two Premier League goals and now a full Ireland international, the Brighton striker came on with 12 minutes left to inject something of a spark. Almost had the cherry on top with a last minute winner when raced onto a miscontrolled Georgian clearance, but his low drive was gathered, while with the clock in the red he had a better chance. The 19-year-old hared onto Whelan's long ball, but with the ball bobbling, could only find the side netting.

The centre-back came on for the final two minutes of injury time.