Live blog on RTÉ.ie and the RTÉ News Now App from 1:30pm

A warm and dry day in Tblisi with temperatures set to hit 21 celsius at kick-off, with minimal wind.

Expectations are high for Ireland

Whisper it quietly but there's a new-found optimism surrounding Mick McCarthy’s Ireland side, who travel to Georgia in expectation, rather than hope for their Euro 2020 qualifier.

Sitting atop the pile in Group D where they remain unbeaten, Ireland are exactly where they want to be going into the most important phase of qualifying.

Having claimed maximum points against group whipping boys Gibraltar, drawn with top seeds Switzerland and Denmark, and edged out Georgia at home, McCarthy’s men know that a victory in Tblisi is essential if they’re to keep their place on top of the table.

With a tricky tie away to Switzerland to follow on Tuesday, Ireland will likely have set a minimum target of four points from this month’s double-header and while Georgia are by no means a pushover, there’s a confidence in the Ireland squad that they can get the win. 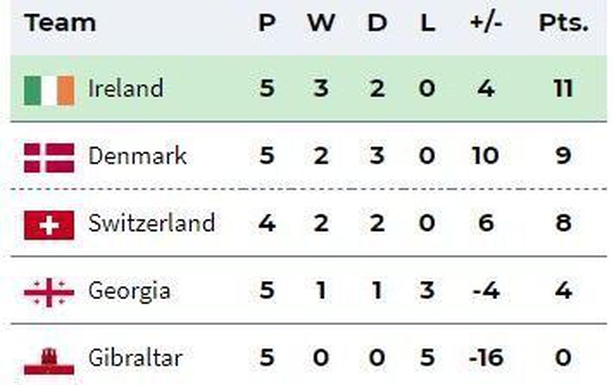 What’s more the belief among supporters that was absent during the later part of the Martin O’Neill era has returned and with a more positive and aggressive style of football on display, Ireland expects.

That’s not to say that this will be a straight-forward encounter. Georgia are an improving side and one that has caused problems for Ireland in the past – famously holding O’Neill’s side to a costly 1-1 draw in their 2018 World Cup qualifying campaign.

Ireland went into that game in a similar position to the one they currently find themselves in, unbeaten and on top of their group and were fortunate to emerge from the game with a draw, as they failed to build on an early goal and turned in a flat and rudderless display.

Goals still a cause for concern

A lack of a real cutting edge up front was an issue in that game back in 2017 and it remains a concern now. For all of Ireland’s improved build-up play they continue to struggle to find the net and have the worst goal return and goal difference of all three qualification hopefuls.

Six goals from five games may on the face of it, not seem an awful return but when you take into account the fact that two of those games came against a Gibraltar side that concede just over an average of three a game, Ireland’s problems in front of goal become clear.

To that end, McCarthy has added  Brighton’s Aaron Connolly to his squad, promoting the Galway teenager to the senior squad from Stephen Kenny’s Under-21s.

Connolly’s two goals and his man-of-the-match display against Tottenham last weekend was enough to win over McCarthy, but it’s unlikely that the Irish boss will throw him in the deep end and start him in Tblisi.

McCarthy has already confirmed that he intends to hold Connolly in reserve until the closing stage whereby if Ireland still need a goal, he should get a run-out.

"I was asked if I had players in front of him and, yes, I have," McCarthy said. "Yes, he could get thrown in, whether it's from the start . . . I'm certain he will be involved at some stage."

The Irish boss has limited options up front but the form of James Collins, Callum Robertson and Sean Maguire means that McCarthy at least has a couple of ways to set-up.

Collins impressed from off the bench last time out against Bulgaria and could be tasked with leading the line for Ireland against Georgia with David McGoldrick ruled out through injury.

McCarthy likes a targetman and may well be tempted to go with Collins up front with Robinson and James McClean behind him on the wings.

If that doesn’t work, expect to see Connolly and Maguire introduced to add a bit more guile and creativity to proceedings.

Georgia desperate for a win

Meanwhile the hosts will feel like they're overdue a slice of luck against Ireland with just one draw to show from the ten times the sides have met, this has historically been a very one-sided rivalry.

That said, Georgia have been rapidly closing the gap in recent years and really should have beaten Ireland in 2017 when Martin O'Neill's side survived a second-half battering in Tblisi to escape with a scarcely deserved 1-1 draw.

Just one goal has separated the sides in Ireland's last four victories over their hosts and like Ireland, Georgia have found goals hard to come by of late.

Manager Vladimir Weiss has named just one senior striker in his squad in the form of Belgian-based forward Giorgi Kvilitaia as Weiss like his side to attack from midfield.

Valeri Qazaishvili, who scored the Georgian goal against Ireland in 2017 remains their biggest threat with 10 goals for his country, while Tornike Okriashvili will also need to be carefully watched by the Irish defence.

Captain Guram Kashia believes that his side can break their duck against Ireland and claim their first ever win against the visitors.

"Ireland has always been an interesting game," he said. "Looking at the build-up historically they have the tradition of getting the results they want against us, but if we look at our last games against Ireland, that's a better indicator.

"Playing at the Dinamo Arena is always special and I'm sure the match against the Irish will be outstanding for us."

Where are they now? Mick McCarthy's first Ireland XI