Scott Hogan is primed to play a part for the Republic of Ireland in Georgia after fulfilling a remarkable promise to score a winner for his club if he was brought in from the cold.

The 27-year-old Stoke striker has played just 80 minutes of league football for his club in four  appearances as a substitute in the last seven weeks after finding himself out of favour.

However, he reported for international duty on Sunday a day after coming off the bench to score a last-gasp winner at Swansea - the Potters' first victory of the Sky Bet Championship campaign - despite initially not being included in the matchday squad.

Hogan was a late addition to the travelling party after being summoned by manager Nathan Jones following a conversation with sports scientist Jared Roberts-Smith during which he told him he would score the winning goal if he was included. 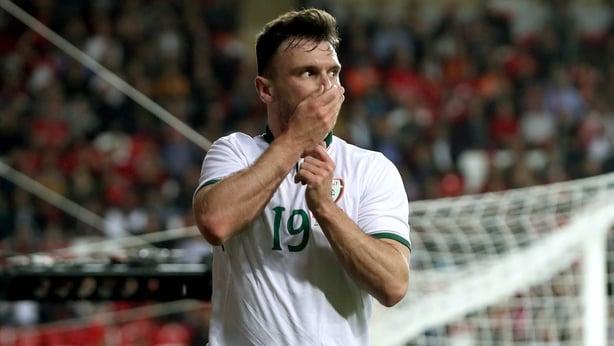 Hogan said: "I hadn't been in the squad for four or five games, maybe, and I hadn't been coming on at all for another four games before that. He named the squad and then he pulled me to one side and just asked me what was I thinking, what was I feeling? I said a few things to him.

"Then 10 minutes before the bus was leaving, the manager pulled me into the office and said, 'Jared's come over to me and said you've said this to him', and I said, 'Yeah, I've said that'.

"He slammed his hand on the table and said... I can't use the language but, 'Get on the bus, get your gear, you're travelling', and then obviously I was on the bench and came on and scored.

"But yeah, I sort of had a little go at him and it worked out."

Hogan's frustration is perhaps understandable after a period in his career which, by his own admission, has seen his stock slide.

A return of 21 goals in 33 league appearances for Brentford prompted Aston Villa to invest up to £12m in his services in January 2017, but it simply has not happened for him at Villa Park and he is currently on loan at the bet365 Stadium after a successful spell at Sheffield United during the second half of the last campaign.

He admitted: "I had two years or so at Villa which, being honest, was terrible from my point. It was as bad as it gets.

"I had no confidence whatsoever after about six months. I just wasn't doing the things I do naturally.

"You're thinking about things in the game. You're thinking, 'I should go there', but then you think, 'If I do go there, I could lose it and they could go and score, then everyone is looking at me.'

"It takes a while to come back and the only way it comes back is through playing and scoring."

Despite his problems at club level, Hogan remains a regular member of the Ireland squad - he has made three appearances in the Euro 2020 qualifying campaign to date and with first-choice frontman David McGoldrick an injury doubt for Thursday night's game in Tbilisi, manager Mick McCarthy could turn to him once again.

Hogan, who is yet to score a senior international goal, said: "I set myself high standards and I don't think I've come anywhere near them at international level, and I expect to score goals every time I step on the pitch.

"But if the manager is happy with my contribution and we are winning and picking up points, then I'm happy with that."