Aaron Connolly thought his call-up to the Republic of Ireland senior squad was a practical joke - but the Galway man says he's fueled by a burning passion to seize his opportunity on the big stage.

Connolly, 19, has turned heads with Brighton and Hove Albion this season in the Premier League, catching the eye in a couple of off-the-bench cameos before exploding into life against Tottenham Hotspur.

His brace in a 3-0 win against the London giants meant his form was simply too good for Mick McCarthy to ignore, and the manager duly called him into his panel for the huge Euro 2020 qualifiers against Georgia and Switzerland.

"After the (Spurs) game, I went for food with my dad," Connolly told FAI TV.

"It's weird. I used to watch Premier League goals with him all the time and I always felt I could do something like that, it’s just I never thought I’d get the chance.

"So to do it against Tottenham, twice, is a 'pinch me' moment. Maybe after these few days are all over, I can move on to the next few months and years of my career.

"I couldn’t have asked for more in how I wanted a debut to go. Everything went well, the two goals, the win. It was just a mad day, the best day I’ve ever had in football. A moment to treasure."

That night, he got the call from Ireland. It was the cherry on top of a surreal day.

"After I’d dropped my dad to Gatwick Airport, I’d just arrived in my girlfriend’s house and a team-mate had said the Ireland manager had been on looking for my number," added Connolly.

"I thought it was a wind-up. But it was true. I rang my parents and they were just shocked. They didn’t expect it either.

"I hadn’t heard much on social media. It was the proudest thing any 19-year-old Irish kid who wants to play for his country could experience.

"I was speechless until I let my family and my girlfriend’s family know." 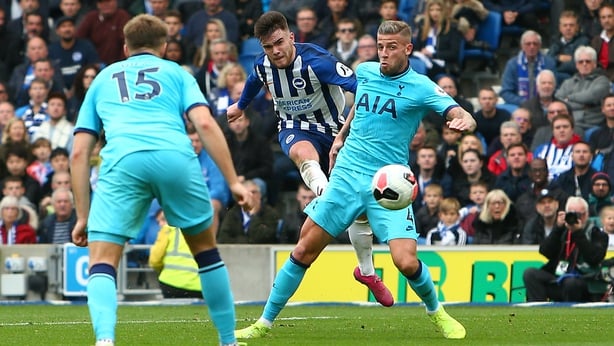 Connolly had been included in Stephen Kenny's Under-21s prior to his surprise elevation to McCarthy's squad.

He's flourished under Kenny's watchful eye over the last nine months, and was full of praise for the senior boss in waiting.

"My passion for Ireland has never changed," said Connolly. "Obviously there were different circumstances and I wasn’t picked in the Under-19s squad.

"But then Stephen Kenny came in and like a breath of fresh air just picked me and gave me the chance to show it’s not what other people think.

"Thankfully I was able to repay his trust. I get on with him well and I'm thankful he brought me in.

"The Under-21s are a great squad to be part of and now the senior lads are looking after me well. I love playing for Ireland and hopefullythat can continue for another couple of years."