Holland manager Ronald Koeman has warned his players they must be prepared to face "fighting machines" when they take on Northern Ireland in Thursday's crunch Euro 2020 qualifier in Rotterdam.

With Holland due in Belfast next month, both teams are viewing the double-header as a head-to-head battle for a ticket to next summer's tournament, and, although the odds favour the Dutch, Koeman is wary of the threat posed by Michael O'Neill's side.

"They are fighting machines," he said through a translator. "Perhaps they haven't got the structure or quality technically but it's very direct, direct confrontations.

"They are a team that can make the games difficult for any opponent and we have to see how we can find the solutions. If they can get at you they will and they will get you by the throat. You've got to be prepared for that."

Koeman watched Northern Ireland's 2-0 defeat to Germany in Belfast last month with interest, but said he believes there is a big difference between the way O'Neill's men set up when they are on the road.

"It can be that home and away there is a difference in their game," he said. "I think they had the idea to perhaps try and finish Germany off and for an hour they were able to live with them and had the better opportunities.

"But from the moment they went 1-0 down you can see the spaces increase and the Germans took advantage." 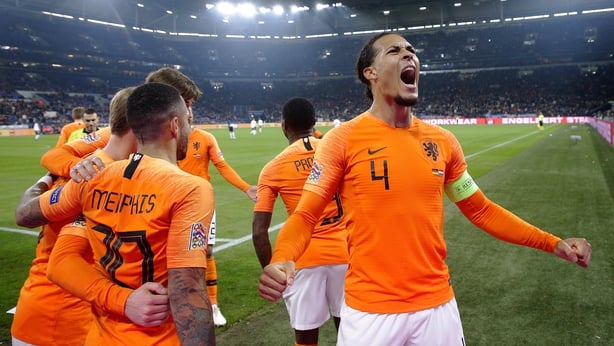 Holland sit three points behind Northern Ireland having played a game less in Group C, bidding to make sure there is no repeat of their shock failure to qualify for Euro 2016.

That memory is an unpleasant one for a nation with such a proud and successful history, putting pressure on Koeman's side this time around.

"We have to qualify still," he said. "Now we play both games against Northern Ireland for our ticket. It starts (on Thursday) and if we don't get the result we want, it will be very painful.

"There is always pressure for Holland. We think that we've always got to play everywhere and we've got the quality for that. I think that this team is very hungry.

"Not many players have played in the big tournaments and everyone wants to be there but there is always the development of a team.

"These two games against Northern Ireland are really important, there is pressure but the players are used to that, they play for big clubs and they've got to win so it's no different to that."

Thursday's match will see Koeman come up against Northern Ireland captain Steven Davis, a player he knows and admires from their time together at Southampton.

"I think if you are talking about football quality he is the best player Northern Ireland have," he said of the 34-year-old.

"I have been with Steven at Southampton for a couple of years, then he had more of an attacking role and now he's more of a defensive midfielder but he has incredible footballing instincts, incredible technique.

"He has aged a little bit but he's still very important. I would like to shake his hand before the match, and then hopefully again after the match with a smile."