Ireland came out on the right side of a five-goal thriller to beat Ukraine 3-2 at Tallaght Stadium and maintain their 100 per cent start to their Euro 2021 qualifying campaign.

Vera Pauw's tenure as Ireland head coach got off to a winning start thanks to two first-half goals from Katie McCabe and Rianna Jarrett as the home side cruised into a two-goal lead after 28 minutes.

Ireland somehow contrived to concede twice late in the first half but they grabbed the all-important winner early in the second half thanks to a fortuitous own goal to seal the victory.

A record crowd of 5328 were on hand to watch the latest chapter in Irish women’s football get underway, and the new coach sent her side out to play front-foot football, playing a 4-3-3 formation with attacking intentions very much to the fore.

Ireland 3-2 Ukraine: An own goal from Pantsulaya restores Ireland's lead after good work down the left wing pic.twitter.com/2kSGFhTIa6

Ireland dominated the early exchanges, and when your left back travels eighty yards to take a throw in, you might have imagined that something special was be about to unfold.

And that was what exactly what happened as Megan Campbell launched a remarkable long throw-in, travelling 40 yards in the air with Lousie Quinn the target – the Arsenal centre-half connected but could not guide the ball on target.

Denise O’Sullivan was everywhere in the opening ten minutes as the Cork native looked to put her stamp on the game early doors.

Ireland maintained the pressure on the visitors who were still, no doubt, hurting from another humiliation against Germany at the weekend, losing 8-0 for the second consecutive game.

Two further Campbell throw-ins wreaked all sorts of havoc in and around the penalty area, but Ukraine managed to scramble clear on both ocassions, with a half-shout for a penalty as Diane Caldwell was bundled over amidst the madness.

Another great move saw Ireland work the ball into the Ukraine box in the 17th minute as Katie McCabe drifted in from the left to run onto a fine through ball from Caldwell.

It was the captain’s first real involvement in the game but the away side, intent on keeping bodies behind the ball, forced the ball wide and eventually out of danger.

But Ireland would break the deadlock a minute later as the ever-lively Rianna Jarrett showed real class to skip down to the left touchline following a brilliantly disguised ball from O’Sullivan.

Jarrett spotting McCabe arriving across the face of the goal, and a perfect ball rolled back into the path of the captain, was perfectly dispatched with a clinical finish low to the keeper’s right.

Nothing more than the Irish endeavours deserved and more was to follow in the 28th minute as goalscorer turned provider with Ireland doubling their lead.

McCabe’s corner was whipped in with pace from the right side and Jarrett was on hand to stoop at the back post to head home from close range having cleverly lost her marker.

Yet somehow Ukraine got themselves back in the game following a real goalkeeping blunder from Marie Hourihan, who had been a virtual spectator up to that juncture.

A nothing ball into the box was fumbled by the keeper and a goalmouth scramble allowed Lyubov Shmatko poke the ball home from close range.

Ireland were shell-shocked and an equaliser almost came a minute later as Veronika Andrukhiv’s long-range effort sailed just wide of the upright.

Ukraine somehow kept the momentum going as Ireland lost their shape and then just two minutes before the break they restored parity.

And while there was pressure in the Ireland box the goal again came from an Irish mistake as Megan Connolly sliced her clearance with Olha Ovdiychuk on hand to slam the ball home.

Ireland came out on the attack in the second half as they attempted to right the wrongs of those final 11 minutes of the first period.

Quinn went close in the 47th minute with a header from a Connolly free-kick, forcing a good save from the keeper who went full stretch, low to her right.

The third goal duly arrived in the 52nd minute as a clever quick throw in from Connolly sent Jarrett racing down the left flank.

The striker’s squared effort fell to the feet of O’Sullivan whose well-hit shot was cleared off the line by Shmatko, but the defender could only divert the ball into the path of the retreating Natiya Pantsulaya who helped the ball into her own net. 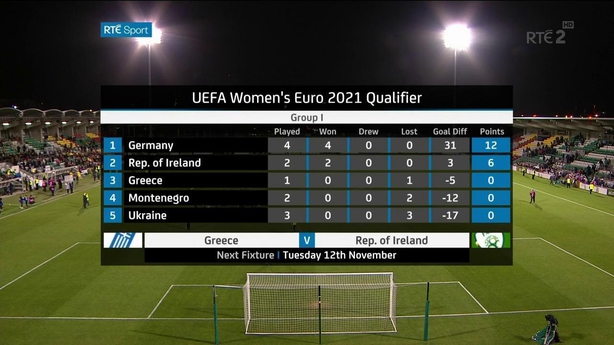 Ireland kept the pressure on the visitors’ penalty area as they looked to restore their two-goal advantage.

But Ukraine weathered the storm and worked their way back into the game with Ovdiychuk coming close to another equaliser in the 66th minute with a header just wide of the back post.

Heather Payne had to be carried off the pitch in the 70th minute following a crunching, late challenge in the middle of the park. West Ham’s Leanne Kiernan came on for the final 20 minutes.

Ukraine pushed for an equaliser and it took a last-ditch Campbell challenge to prevent the dangerous O Ovdiychuk from getting in on goal.

Ireland pushed for a fourth but it was Ukraine who ended the game in the ascendancy as the home side sat in to weather the five minutes of added time.

Captain Daryna Apanaschenko conjured one final chance for the visitors in their efforts to grab a late point but Ireland keeper made amends for early errors to claw the ball away and help her side to take three deserved points to stay second in the group behind leaders Germany.