Five down, three to go; Ireland head off on their travels this week looking for valuable points from away days in Tbilisi and Geneva in their quest to qualify for Euro 2020.

Ireland currently top Group D as we enter the business end of the campaign as Mick McCarthy's charges remain unbeaten with 11 points from their five games played.

Denmark are two points behind Ireland in second place with the same amount of games played, while fellow qualification hopefuls Switzerland sit on eight points with a game in hand on both the Danes and Irish. 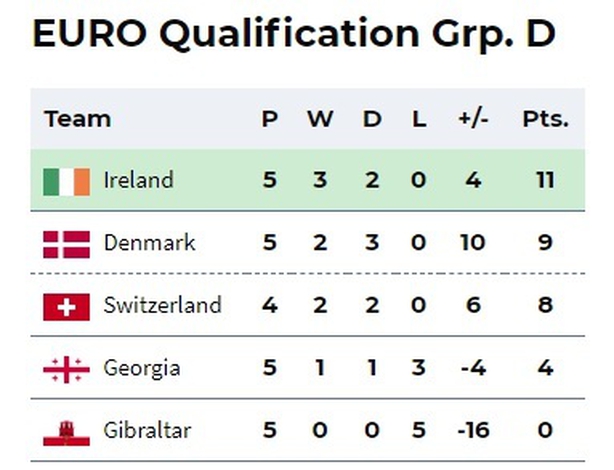 Denmark’s deficit comes down to the two points that they dropped in Georgia last month as Age Hareide’s side were held scoreless in Tbilisi.

The head-to-head results among the top three have shown that this group is fairly evenly matched with Ireland drawing with both sides, away to Denmark and at home to Switzerland, while the latter two played out a remarkable 3-3 in Basel last March.

Looking ahead to Saturday, Ireland will hope to be three points further clear of both sides before a ball is kicked in the vital meeting of Denmark and Switzerland in Copenhagen on Saturday.

Ireland take on Georgia in Tbilisi at 2pm (Irish time) with the game in Denmark starting an hour after the final whistle at 5pm (Irish time).

Victory for the Irish in Tbilisi will ensure that they have something to play for in their final game of the group when they take on Denmark at the Aviva Stadium on Monday, 18 November. 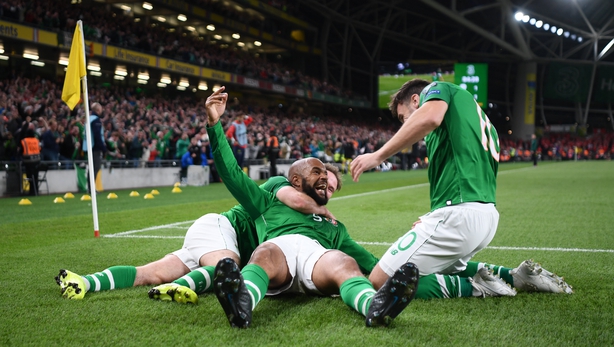 But recent history has ensured that Ireland will travel away this weekend with extreme caution as they look to record a win in Georgia.

Saturday’s fixture will be the sixth time that the two nations have met over the past five years and while Ireland have won four of the five, they have never enjoyed more than a one-goal victory.

Back in September 2014, in Martin O’Neill’s first competitive game in charge, a late Aiden McGeady goal was needed to see the Irish snatch a 2-1 victory, while they scraped a 1-0 result in Dublin in the return fixture.

Lessons were not learned for the 2018 World Cup qualifying campaign as again, Ireland laboured to a 1-0 win in Dublin before letting an early 1-0 lead disappear back in Georgia, with O’Neill’s side lucky to hang on for a 1-1 result in the end.

Another 1-0 win came in Dublin, this time under McCarthy’s reign back in March, however the performance was much more akin to what was expected as Ireland dominated for large parts and should really have won by more.

That showing will instil confidence in McCarthy’s men heading to Tbilisi and should three points be acquired, the team can sit back and enjoy watching the other two battle it out on Saturday evening.

The manager would not offer his thoughts on that particular game during the week, as he maintains focus on the Georgia trip.

"If we go there concentrating on what might happen with Denmark or Switzerland and take our eye off the ball with this one, that would be stupid," said McCarthy.

"Tell you what I’d like - to beat Georgia. I cannot take care of anything else."

A victory for Switzerland in Denmark would probably prove the most favourable outcome from an Irish perspective. 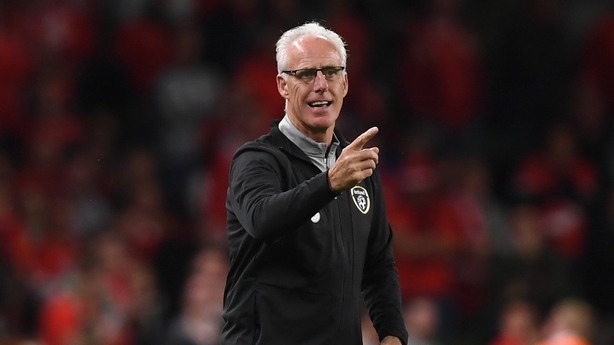 Such a scenario could leave Ireland needing only a draw in the final decider with Denmark once three points are secured on Saturday.

Regarding the group thus far, it must be noted that Switzerland have been the stand-out side in terms of quality, and they will rue three late goals conceded against Denmark, as well as the David McGoldrick effort in Dublin which ensured a share of the spoils.

Ireland, of course, go to Geneva on Tuesday and coming off the back of a win in Georgia, McCarthy’s men would have the freedom to really take the hosts on in their own back yard.

And while the Swiss have shown real quality in attack, they have been vulnerable in defence. If Ireland can frustrate once more, they could still gain something from that game.

Either way, Ireland will hope that the Swiss clash in Denmark is one of an attritional nature as they would then meet Ireland three days later following a tough game away in Copenhagen.

So the likeliest scenario at the end of this double-header will be that Ireland should still have something to play for when Denmark come to town in November.

Yet there are two other scenarios that must be considered.

The fairytale scenario sees Ireland bring six points home from their travels and with it guaranteed qualification for next summer’s showpiece.

The nightmare scenario would see Ireland come back empty handed, and coupled with a Danish win in Copenhagen on Saturday, the Dublin game could be a dead rubber with the group already decided.

And should that be the case, we may need to reacquaint ourselves with our old nemesis, the UEFA Nations League for a back-door into the Dublin co-hosted tournament in 2020.