Stephen Kenny has admitted Aaron Connolly's elevation to the senior Republic of Ireland squad came as no surprise to him.

The 19-year-old Brighton forward was initially named in Kenny's under-21s squad for their European Championship qualifiers against Italy and Iceland, but was swiftly drafted into McCarthy's ranks after scoring twice in Brighton's 3-0 win over Tottenham on Saturday.

Asked if he was dreading a call from the Yorkshireman, Kenny said: "No, I wasn't dreading it. We were in contact and it wasn't a shock by any stretch of the imagination.

"He's been playing really well, he's lighting up the matches he's come into for the international team and at club level and he took his goals brilliantly on Saturday, so he deserves his call-up and we sincerely wish him well."

Connolly will be a big miss for the under-21s having starred in their victories over Armenia and Sweden last month, but he will embark upon a new adventure as Ireland attempt to strengthen their grip on Euro 2020 qualification in Georgia and Switzerland.

Kenny said: "We want to have our strongest players available at under-21 level to try to compete with the likes of Italy, who have got tremendous resources and a great panel of players to pick from.

"But at the same time, we're delighted to see players go and become senior internationals. That's the overall objective, so we're delighted, really."

Ireland midfielder Conor Hourihane knows just what a threat his new international colleague could pose having played against him in the Carabao Cup earlier this season.

Asked about the teenager's performance in a 3-1 defeat for the Seagulls at the hands of Aston Villa, Hourihane said: "He was a nuisance, if I am being honest, that night. I was delighted when he went off. 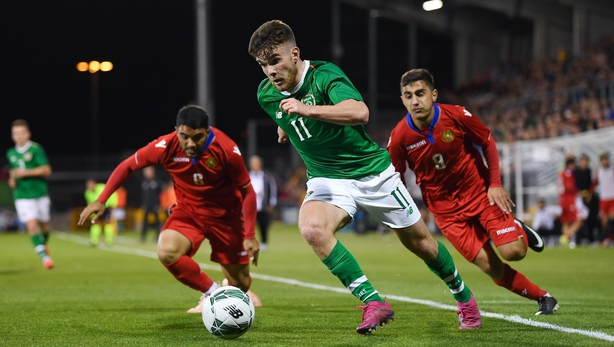 "He runs channels really well, he chases lost causes, doesn't give the centre-halves any time on the ball. He's really quick, really sharp, a nuisance really.

"He could have had a couple of goals that night - I think he hit the crossbar. He just gives defenders a tough night. I imagine when he went off, our centre-halves were delighted as well."

Asked if he was concerned that the jump from the under-21s to the senior team might be too great, Hourihane said: "No, definitely not. Everyone who is in the squad, the gaffer obviously feels like they can make an impact and push everyone for positions or whatever.

"Listen, if you're in the squad, that automatically says that you're good enough to play, so I have no worries for Aaron or anyone in the squad."