"There are big moments in this team," said Dundalk head coach Vinny Perth, who was full of praise for his players following their last-gasp 1-0 victory over Sligo Rovers at The Showgrounds.

The league champions kept their treble dream alive by snatching this semi-final cup tie, thanks to Michael Duffy's 89-minute winner, which sees the Lilywhites qualify for their fifth consecutive final.

Shamrock Rovers await Perth’s side at the Aviva Stadium on 3 November, and while Perth acknowledged the tough test that Sligo provided in this tense cup clash, he felt that his side did just enough to win it.

"We're one game away from a little bit of history. Sometimes you have to win it different ways, but it was a proper cup tie with two strong teams who went at each other," said Perth, speaking on this week's RTÉ Soccer Podcast following the game.

"We would have liked to have been a bit more clinical but the pitch was difficult.

"I just feel there are big moments in this team, and we have seen that tonight as Michael [Duffy] put one away, and Sean [Murray] could have put one away before that.

"I think we were very strong and very fit, but they put it up to us, and when you look at that game, it was a brilliant occasion.

"We showed a little bit of quality in the end. We started well and finished well and we did enough to win it." 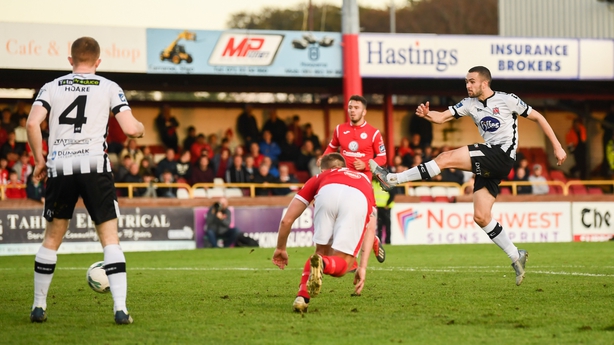 And Perth stressed the importance of his bench and the impact his substitutions had on proceedings as the Oriel Park side kept going until the final minute to avoid a replay.

Patrick McEleney had to depart early with a hamstring concern, which meant that Robbie Benson was sent on early in the game.

Sean Murray and Georgie Kelly came on late in the second half and both players made a real impact over the final 20 minutes as Dundalk started to turn the screw on a fading Sligo side.

Murray had a chance to win it late in the game but blasted over from six yards, while Kelly played a crucial role in the deciding goal as he headed the ball back into the path of the arriving Duffy, who sealed his side’s place in the November decider.

"We lost one so early, and we like to have three attacking option, so we had to hold on a bit with Georgie. The subs made a real impact and that was important."

Michael Duffy hammers the ball home for what might be the match-winning goal for Dundalk. pic.twitter.com/1wtDgTEDZ9

And the manager was full of praise for goalscorer Duffy who helped his side to secure the league title on Monday night with an unstoppable effort against Shamrock Rovers, before grabbing the winner in Sligo.

"He just keeps going and it is a testament for his fitness. He has played over 45 games this season. He said he shanked it, but I thought it was a great hit."

Looking ahead to the final, Perth admitted that it was going to be a great occasion, while he would have to wait and see whether McEleney’s injury will put him in doubt for the clash with Rovers on 3 November.

"We want to go after the Cup final, it will be a great occasion," said Perth.

"It is going to be special. We really respect the Cup, it’s our national cup and it is a brilliant achievement by this group of players, they deserve all the credit.

"There is just a lot of tightness in [McEleney’s] hamsting and it wasn’t worth the risk. It is the first time we have had a real muscle injury all season. We’ll find out tomorrow."