Mick McCarthy praised the performance of Kieran Sadlier as he watched the former Sligo Rovers and Cork City man score on Saturday.

Sadlier netted against Peterborough United in a 2-0 win for Doncaster Rovers, with the Ireland boss admitting he went to the Keepmoat Stadium to see if positive things he had been hearing about the attacker were to be believed.

"I'll name the squad for Georgia and Switzerland on Tuesday week and I wanted to have a look at Kieran for myself," McCarthy told FAI.ie.

HIGHLIGHTS | @KieranSadlier loves a goal against his former club Peterborough United - including this one which sealed Saturday's 2-0 win. Watch the full highlights back on the club's YouTube channel.https://t.co/hiQSNmN8Rh pic.twitter.com/CPAawohEG5

"Terry Connor had heard good things about him from the Doncaster coaching staff and our scouts had seen him but I wanted to have a look at him with my own two eyes. I know all about the other options available to us so this trip to Doncaster made sense.

"Kieran played well. He’s been operating on the right side of late having started the season as a centre-forward and he took his goal well." 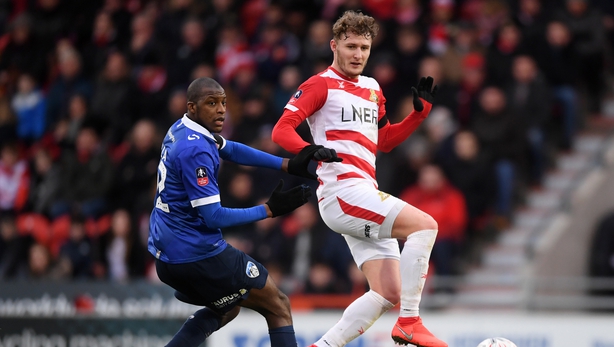 There were other forward players who caught the eye at the weekend, including Preston’s Sean Maguire who scored his second goal in as many games.

McCarthy added: "Sean scored again as well which is great news. He was very unlucky with the injury that kept him out of the Swiss and Bulgaria games so it’s good to see him back and in the goals again while Callum Robinson is also fit and back in the Sheffield United team.

"Aaron Connolly was the one who really caught the eye with the 21s against Armenia. He is getting game time in the Premier League now with Brighton which will really benefit him and us and he was unlucky not to score at Newcastle.

"We are talking to Spurs and Terry will watch Troy Parrott this week in the Under-23 game at Blackburn on Monday or the Football League Cup match against Colchester on Tuesday night if he is involved in that one."

The left-back conundrum has also been on McCarthy’s mind as he ponders what to do for the game in Georgia.

Assistant manager Connor was at Reading on Saturday as Greg Cunningham, Darragh Lenihan and Derrick Williams helped Blackburn Rovers to a 2-1 away win while James McClean was watched in Stoke’s scoreless draw at Brentford.

"With Enda Stevens suspended for the Georgia game, we are looking at left-back options," added McCarthy.

"Terry saw Greg play there for Blackburn, we had James watched for Stoke and I saw Ryan Manning play for QPR against Luton last week.

"The important thing right now for Matt Doherty and for us is that he is playing again," concluded the Ireland boss as he discussed the chances for the Wolves man.