Republic of Ireland Under-21 international Aaaron Connolly came within a whisker of firing home a dream Premier League winner for Brighton at Newcastle, as the exciting Galway man offered further proof of his huge potential.

Connolly came off the bench at St James's Park in the 71st minute and almost broke the deadlock four minutes later, flicking a delicate effort beyond keeper Martin Dubravka but seeing Swiss defender Fabian Schar produce an incredible clearance off the line.

Centimetres from a huge personal milestone he may have been, but Connolly could still be satisfied with an impressive showing.

His hold-up play and movement caused the hosts problems and, having made his league debut against Manchester City, the 19-year-old now looks like he's very close to making a first start for the Seagulls.

Another young Brighton prospect, England's Steven Alzate, was also excellent on his full league debut, and boss Graham Potter had praise for both afterwards.

"Steven and Aaron Connolly have both impressed," he told Sky Sports.

"It's good for the club, good for the academy that there's some players that can influence a game in the Premier League." 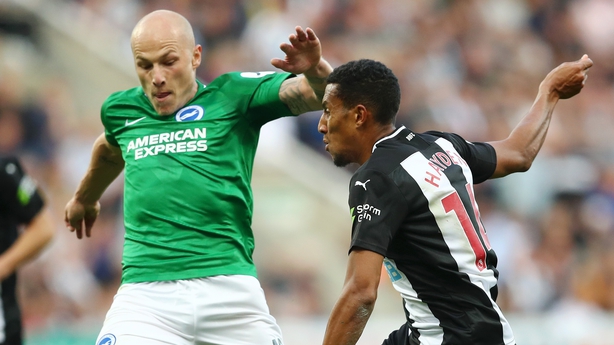 Brighton headed off on the long journey home knowing they had left two points behind having dominated the game without being able to summon up the necessary quality in front of goal to clinch the victory their performance so richly deserved.

By contrast, Steve Bruce's men could count themselves fortunate to have walked away with something to show for their efforts from a display which was greeted with boos on both the half-time and full-time whistles by a crowd of just 43,316.

It was the visitors who warmed to their task more readily as Dale Stephens, Davy Propper, Aaron Mooy and Pascal Gross dominated the midfield battle to the extent that the Magpies found themselves pinned back deep inside their own half with striker Joelinton marooned.

Martin Dubravka had to tip Lewis Dunk's looping header from an 18th-minute corner over the bar, but it was opposite number Mat Ryan who was forced to make a vital block after Miguel Almiron, still awaiting his first goal in a black and white shirt, was played into space inside the penalty area by Isaac Hayden four minutes later.

Jamaal Lascelles threw himself into the path of Neal Maupay's close-range 26th-minute strike with Dubravka scrambling across his goal, and Mooy blazed wide after Gross had cleverly flicked Propper into space down the right.

However, Joelinton should have headed the home side in front after being left unmarked as Jonjo Shelvey sent in a 31st-minute corner, but he guided his effort wide of the far post.

The Magpies left the pitch at half-time to a predictable chorus of disapproval, but Christian Atsu might have altered the mood markedly within seconds of the restart, instead firing wide from Joelinton's pull-back, and Brighton's response very nearly paid dividends.

Lascelles once again put his body on the line to deny Maupay, who had slipped past Schar with ease, and Gross sent a fierce shot inches over the crossbar with the home side chasing shadows once again.

Almiron provided some respite when his skipped away from full-back Dan Burn and sent Ryan full-length as he attempted to pass the ball left-footed into the far corner.

Bruce sent on Ki Sung-yueng and Allan Saint-Maximin for Shelvey and Almiron as time ran down, but it was Schar who came to the rescue with a goal-line clearance after Connolly had lifted the ball over the advancing Dubravka.

Dunk was in the right place at the right time to block Joelinton's 75th-minute attempt after Saint-Maximin had surged deep into Brighton territory, and Andy Carroll entered the fray for the final eight minutes, but ultimately to no avail.