The death of the Gers' former captain Fernando Ricksen on Wednesday at the age of 43 following a six-year battle with motor neurone disease made it an emotional night in Govan.

The Light Blues evoked the spirit of the Dutchman against the side from the Netherlands and after skipper James Tavernier had struck the outside of the post with a penalty, Ojo fired in a glorious drive from 20 yards in the 24th minute for what proved to be the winner.

The Rotterdam side threatened in a more even second half and might have snatched a point although the home side had chances to score more.

Indeed, Gers boss Steven Gerrard will probably believe the game should have been over by the interval, such was his side's superiority in the first-45 minutes.

There was a shock in Group E too, where Italian giants Lazio suffered an embarrassing defeat at CFR Cluj, goals from Ciprian Deac and Billel Omrani helping the hosts hit back from behind for a 2-1 win.

Lazio's city rivals Roma made no mistake as they kicked off Group J with a 4-0 win over Istanbul Basaksehir, Justin Kluivert rounding off a one-sided night with an injury-time strike.

Arsenal made an impressive start in Group F as Joe Willock, Bukayo Saka and Pierre-Emerick Aubameyang all scored in a 3-0 win at Eintracht Frankfurt.

Ryan Christie converted a second-half penalty as Celtic came from behind to start their Group E campaign with a 1-1 draw at Rennes. M'Baye Niang had put the hosts in front from the spot but Celtic earned a point despite having Vakoun Bayo sent off in stoppage time.

Goals from Donyell Malen, Timo Baumgartl and a Seb Coates own goal gave PSV a 3-2 Group D win over Sporting Lisbon, who replied through a Bruno Fernandes penalty and Pedro Mendes.

Sevilla were 3-0 winners at Qarabag, with second-half goals from Javier Hernandez, Munir and Oliver Torres, while Angel scored the only goal of the game in the 18th minute as Getafe beat Trabzonspor in Group C.

Espanyol salvaged a 1-1 draw at home to Hungarian side Ferencvaros thanks to a second-half equaliser from Matias Vargas.

Claudiu Keseru scored a hat-trick as Bulgarian side Ludogorets thumped CSKA Moscow 5-1 in Group H, while Luxembourg minnows F91 Dudelange continued their remarkable run with a 4-3 win over APOEL in Cyprus. 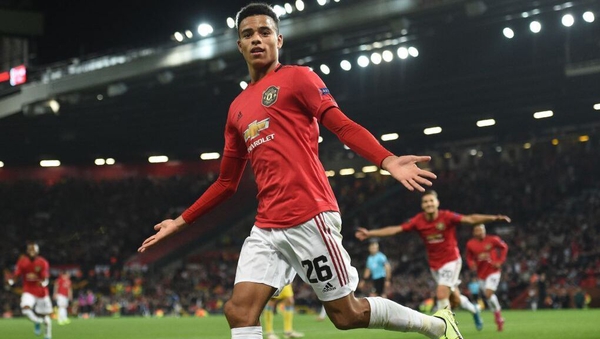 Greenwood off the mark in unconvincing Man United win