Dinamo Zagreb made a magnificent start to their Champions League Group C campaign with a 4-0 win in Croatia over Italian rivals Atalanta.

Midfielder Marin Leovac fired Dinamo ahead in the 10th minute before a Mislav Orsic hat-trick sent Atalanta reeling on their debut in Europe's premier club competition.

The score did not flatter the home side as they missed several chances to win by a bigger margin having ripped into the visitors with crisp one-touch passing and darting raids down both flanks.

Atalanta barely threatened and missed their best chance after the damage had already been done, as Dinamo keeper Dominik Livakovic pulled off a magnificent save to deny Duvan Zapata.

Leovac opened the floodgates when he slid in to meet a perfect Petar Stojanovic pass from the right and blasted it into the roof of the net from close range, with Atalanta keeper Pierluigi Gollini a mere bystander.

Leovac turned provider in the 31st minute after he left his marker for dead on the left flank and squared the ball back to Orsic, who side-footed it sweetly into the bottom left corner of the net from the edge of the penalty area.

Another raid by Stojanovic produced the third goal in the 42nd minute as Arijan Ademi met the defender's deep cross at the far post and headed it back for Orsic to nod in from close range.

Livewire Orsic completed a memorable night with a superb finish in the 68th minute, applying a perfect first touch to control a lofted pass into his stride before driving an unstoppable shot past Gollini. 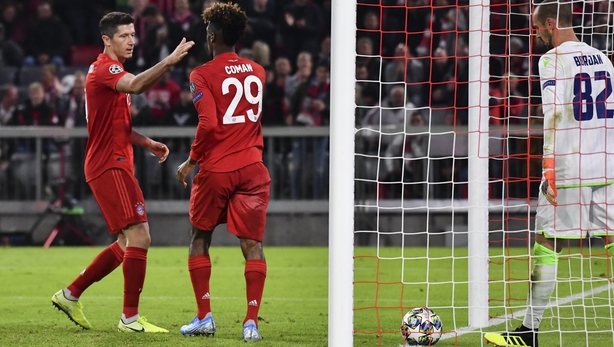 Bayern Munich kicked off their campaign by easing to a 3-0 victory over Red Star Belgrade in a one-sided Group B encounter.

Kingsley Coman headed them into the lead in the 34th minute from a fine Ivan Perisic cross and the Bundesliga's leading scorer Robert Lewandowski slid in for the second goal in the 80th.

Thomas Mueller, who became the club's record Champions League appearance maker when he came on as a substitute for his 106th game in the competition, volleyed in his first goal of the season in stoppage time.

Bayern, who stretched their unbeaten run in Champions League group stage home matches to 16, carved out chance after chance and twice hit the woodwork, while the Serbs, who battled through qualifying, were largely toothless up front.

Lokomotiv Moscow are top of Group D after a 2-1 win at Bayer Leverkusen, following first-half goals by Grzegorz Krychowiak and Dimitri Barinov.

Benedikt Howedes had put through his own net after 25 minutes.

Club Brugge and Galatasaray played out a 0-0 draw in the early kick-off in Group A at Jan Breydel Stadium.

The result extended the unbeaten run of the Belgium club in the competition, but they were left to rue a number of missed chances.