West Ham were unable to give Manuel Pellegrini three points on his 66th birthday but the Hammers boss will have been pleased by how his side battled for a goalless draw with 10 men at Aston Villa.

The clearest chance of the game came in first-half injury time when Lukasz Fabianski displayed fine agility to make a one-handed save to deny John McGinn.

Arthur Masuaku's red card midway through the second half might have seen Villa press home their numerical advantage but instead the game ebbed and flowed and West Ham could have even won it themselves.

Pellegrini's team had a couple of early sights of goal. Andriy Yarmolenko saw a goalbound effort deflected wide after good work down the right by Ryan Fredricks before Mark Noble sent a 20-yard shot straight at Tom Heaton.

Villa threatened for the first time in the 13th minute following tidy build up play down the right between Jota and Jack Grealish, whose near-post cross was perhaps too pacy for Wesley to guide his header on target.

Sebastien Haller went close to scoring for the third Premier League match in a row but he headed Felipe Anderson's cross wide.

Masuaku, Grealish and Noble all received yellow cards in quick succession as the match became a little scrappy around the midway point of the fist half.

Anwar El Ghazi was arguably fortunate to escape a red card after an exchange of opinion with Tyrone Mings saw him push his head into his team mate's just after the half hour. 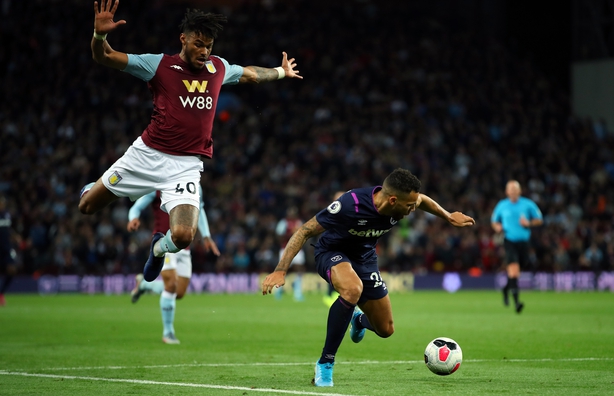 Fabianski ensured the teams went into the break goalless by producing a fine one-handed save down to his right to deny McGinn in first-half injury time.

McGinn was in the thick of the action again at the start of the second half. The Scot was just off target with a 25-yard effort before his chipped pass over the West Ham defence found El Ghazi and his shot on the half-volley brought another good save from Fabianski.

At the other end, Heaton was seriously tested for the first time by team-mate Neil Taylor after he had to dive full stretch to keep the ball out after it was headed back by the Welshman.

West Ham were reduced to 10 men after 67 minutes when Masuaku, booked in the first half, received a second yellow card for a trip on Villa substitute Ahmed Elmohamady.

The visitors were still a threat, however, and only a brave sliding block by Mings to deny Haller from 12 yards out prevented certain trouble for Heaton.

Despite their numerical advantage Villa failed to really worry West Ham, instead inviting pressure on themselves through individual errors and silly fouls inside their own final third.

Villa should have been dominating and probing for a winning goal but the game had become end to end and frenetic.

The hosts did create a clear chance with two minutes of normal time remaining but Grealish, at full stretch, was unable to direct his volley on target from seven yards out at the back post.

West Ham put Villa under pressure late on with the hosts often leaving it two against two at the back, but Dean Smith's side survived.