Substitute Jeff Hendrick grabbed a 90th minute equaliser as Burnley held Brighton and Hove Albion to a 1-1 draw at the Amex Stadium in the Premier League on Saturday.

French forward Neal Maupay had put Albion ahead in the 51st minute, with his second goal of the season, volleying home a cross from Solly March.

But Burnley manager Sean Dyche threw up on strikers Matej Vydra and Jay Rodgriguez in the search for a point and the move paid off when Czech Vydra slipped the ball to Hendrick on the edge of area and the Republic of Ireland international drilled the ball home.

Both teams are on five points each, with one win and two draws from their opening five matches.

Moussa Djenepo marked his first Premier League start for Southampton with the winning goal against Sheffield United at Bramall Lane.

The Mali international forward, signed from Standard Liege in the summer, scored the only goal of the game after 66 minutes to give Saints a 1-0 victory.

It settled a match in which both teams spurned gilt-edged chances, especially in the first half, and overall it was harsh on the hosts - who had a goal ruled out for offside following a VAR review shortly before Djenepo struck.

The Blades' frustration was compounded late on when substitute Billy Sharp was shown a straight red card after catching Stuart Armstrong on the shin with a late challenge.

The game sprung into life after 11 minutes when former Blade Che Adams' volley from the edge of the penalty area thumped against the foot of the post.

Immediately at the other end, a counter-attack saw David McGoldrick through one-on-one with Angus Gunn but the Southampton goalkeeper blocked his effort. 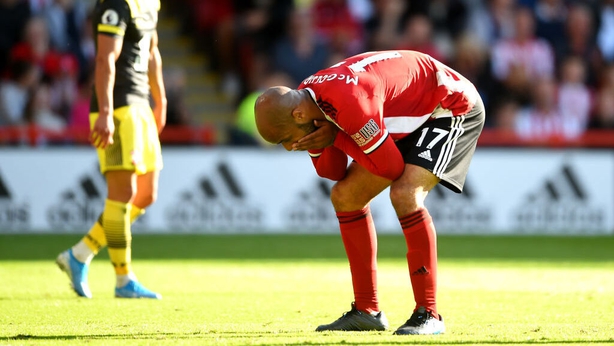 John Fleck powered a header over the crossbar when he should probably have hit the target, given the space he was afforded.

The fit-again midfielder, back in the side after being injured for the draw at Chelsea prior to the international break, went close again when Jannik Vestergaard got caught under the ball from Enda Stevens' diagonal pass, allowing him to control on his chest and make Gunn block at his near post.

Southampton had a couple of good chances just before the half-hour mark as the match continued to ebb and flow. Cedric Soares should have done better than blast the ball into the side-netting from a tight angle, before Dean Henderson produced a superb save to claw out a header from Adams.

McGoldrick was unable to control his touch at the far post from a driven cross from Oliver Norwood when it looked like he would score.

A series of defensive errors by the hosts presented Southampton with a good chance to head into half-time in front but Sofiane Boufal rushed his shot, taking it first time when he could have had a touch, and Henderson made a routine save down to his left.

The Blades thought they had taken the lead eight minutes into the second half but Oli McBurnie's far-post finish from Norwood's beautifully-delivered free-kick was ruled out for offside following a VAR check.

Adams was a thorn in the side of his old club all afternoon and was at the centre of most of the good things Saints did, in tandem with Boufal. He had another effort on goal but Henderson was equal to it as he got down to his right to palm away the ball.

Southampton took the lead just after the hour when Boufal nicked possession in midfield. Djenepo showed good strength to hold off the challenge of Norwood, who tried to foul him at least a couple of times, before jinking his way into the penalty area and beating Henderson with a low shot into the bottom corner of the net.

Fleck flashed a shot just past the post from 25 yards out as the hosts tried to equalise and McGoldrick was denied by Gunn again. However, Sharp's red card against his former club all but ended any hopes they had of getting anything from the match.