The Republic of Ireland's qualification chances received a boost today as Denmark were held to a 0-0 draw away to Georgia in Tbilisi on Sunday afternoon.

But Mick McCarthy was keen to stress the quality of the hosts and the size of the task awaiting Ireland when they head for Georgia in October.

McCarthy and his players watched the stalemate over dinner at the team hotel and while he welcomed the result, the boss said he won’t be reading too much into it.

"I was listening to the commentary and at the end of the match they were making out that Denmark had fluffed their lines," he said.

"I don’t agree. Georgia are a good team, they were playing at home and the result just highlights for me how hard it is to go away and win in this group.

"Georgia might even have won it when they put that free-kick straight at [Kasper] Schmeichel at the death and there were a few shouts around the room here when that happened.

"Don’t get me wrong, I’m delighted it was a draw but the onus is still on us to go out there now and pick up points in October."

Danish talisman Christian Eriksen cut a frustrated figure throughout the second half as the visitors struggled to control the encounter.

The visitors did enjoy most of the play in the first half but were unable to make it count on the scoresheet and as the game wore on, the home team grew in confidence and began to dictate the game, threatening Age Hareide's team on several occasions. 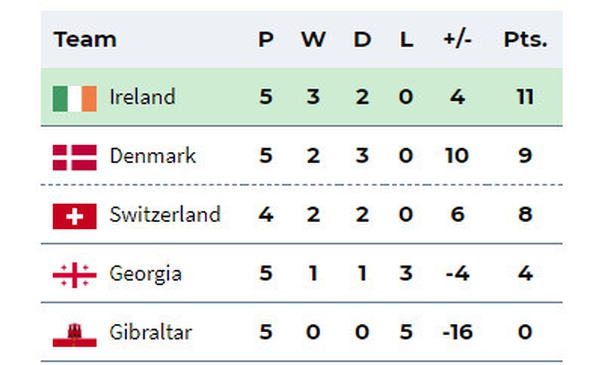 Christian Gytkjaer almost stole the three points near the end when he smashed a shot against the crossbar but by the end it was the Georgians on the attack with Kasper Schmeichel forced to make a smart save in the final act of the game.

Ireland are now two points clear of Denmark in the group, having played the same number of games. McCarthy's squad will visit Tblisi on 12 October for the their next qualifier.

Tornike Oqriashvili curls the free-kick into the arms of Kasper Schmeichel and that is that. 0⃣-0⃣@FAIreland - you owe us a beverage or two when you visit #Tbilisi next month! 😉

Elsewhere in Group D, Switzerland disposed of Gibraltar as expected, winning 4-0. First half goals arrived courtesy of Denis Zakaria, Admir Mehmedi, Ricardo Rodriguez with Mario Gavranovic adding a fourth in the dying minutes of the game.