Joachim Loew has warned his Germany side to expect an aggressive approach from Northern Ireland in Monday's Euro 2020 qualifier at Windsor Park.

Germany go into the match still reeling from their defensive collapse on Friday, when they conceded four second-half goals to lose 4-2 to Holland and surrender their perfect start to qualifying.

But Germany have never lost back-to-back qualifiers, just one of a string of statistics they can draw comfort from.

Loew has won all three of his previous meetings with counterpart Michael O'Neill and Germany have won their last seven against Northern Ireland, though he told his side to take nothing for granted.

"The game against Holland gave me some important insights," Loew said. "The mentality and the motivation to fight every little battle was missing.

"Northern Ireland are very physical and we need to be ready for their aggression."

The last meeting between the two came during qualifying for the 2018 World Cup, with Germany 3-1 winners at Windsor Park, since when both squads have been overhauled.

"Northern Ireland are very strong," Loew said. "They have many players with Premier League experience.

"Here in the stadium there is an incredible atmosphere. We have to be prepared for that. Every corner, every free-kick is cheered."

Loew's plans for the match have suffered a blow with Ilkay Gundogan withdrawing from the squad on Sunday due to illness. 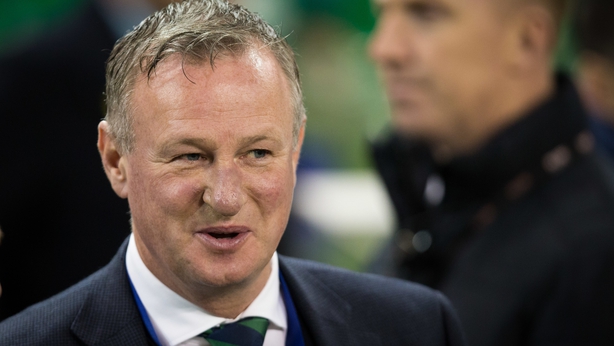 The midfielder is suffering from flu symptoms, but Low said he expected him to recover within three or four days and be available for Manchester City's trip to Norwich at the weekend.

Though Friday's result was a setback, Loew said it may do his young team good in the long run.

"We have suffered a setback but this was not unexpected at some point," he said. "Nevertheless we are still on target.

"I am convinced the team has the quality to evolve over the next few months and years so that we enjoy it."

Defender Joshua Kimmich made no excuse for Friday's defeat.

"We were, over the 90 minutes, the worst team," he said. "We deserved to lose. Now we must show a response tomorrow.

"We wanted to be top of the group and to look down on the others, but we have got ourselves into this.

"Anyone who thinks tomorrow will be a walk in the park is wrong."