Georgie Kelly came off the bench to score a priceless winner as Dundalk moved 10 points clear at the top of the SSE Airtricity League table with a hard-fought win over Cork City at Oriel Park.

Despite pushing hard for an opener, the hosts were kept at bay by Neale Fenn's dogged Leesiders but less than 60 seconds after being introduced for Jamie McGrath, Kelly darted to the near post to turn Sean Gannon’s cross past Tadgh Ryan.

The result moves Dundalk 10 points clear of Shamrock Rovers at the summit and if the Lilywhites beat Waterford in their next league game on 20 September, they will be crowned champions again with a win against the Hoops at Oriel Park three days later.

Coming into the game on the back of six straight wins, Dundalk started on the front foot with Patrick Hoban having the first sighting of goal with seven minutes played.  A neat bit of approach play on the right by Sean Gannon and Jamie McGrath left young Ronan Hurley exposed. McGrath's cut-back fell invitingly for Hoban but he couldn’t keep his effort down.

Cork did fashion a good opening of their own in the 10th minute when Shane Griffin’s cross from the left found Eoghan Stokes just outside the six-yard box but Andy Boyle did enough and the ball deflected over the top.

Fenn had to plan without the experienced pair of Karl Sheppard and Garry Buckley who missed out completely with injuries while Mark McNulty, another stalwart of this fixture over the past six years, was named on the bench.

Tadgh Ryan was once again given the nod between the posts and he did well to gather an instinctive Robbie Benson drive in the 23rd minute, the ball flying off the midfielder’s knee after Michael Duffy’s run into the box was halted by a couple of green shirts.

The 22-year-old keeper was almost left embarrassed just shy of the half-hour when Gannon’s cross deflected off Shane Griffin, hopped off the artificial surface and looped over his head. Thankfully for Ryan, Dan Casey was there to mop up. 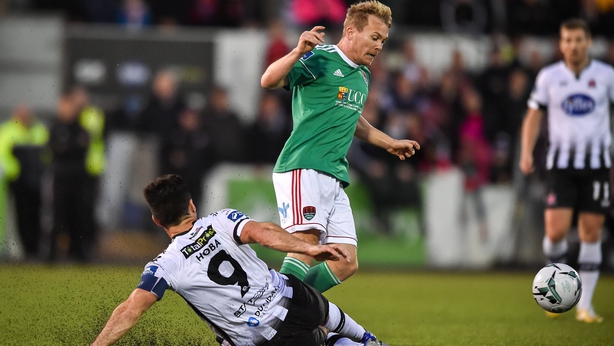 The visitors continued to look defensively sound and they frustrated Dundalk as the half wore on but they lacked invention in the final third despite finding themselves in promising positions at times.

Daire O’Connor blazed over from 35 yards after space opened up in front of him while Mark O’Sullivan couldn’t direct a header on target after a break forward by the busy Conor McCormack and a lackluster half ended scoreless.

Perth’s side upped the tempo in the early stages of the second half, pinning the Rebels back for long spells, and Hoban saw a vicious low drive fly across the face of goal before Casey made a good block to charge down Benson’s powerful hit.

Dean Jarvis sent a dipping volley over the bar on the hour and Patrick McEleney was denied on two occasions, once by Ryan, who made a fine stop as Cork defended as if their lives depended on it.

They finally buckled with 12 minutes to go. McEleney’s sweeping ball to the right found Gannon and his delivery across the face of goal found Kelly who did enough to score his seventh goal of the season and condemn Fenn to his third straight defeat since taking over in the Cork hot seat.