Mick McCarthy insisted that the door remains open for Shane Long to return to the Ireland squad, confirming that the striker remains in his plans for the remainder of the Euro 2020 qualification campaign.

The Southampton front man was left out of the Ireland squad to face Switzerland on Thursday, but the manager explained that it was solely down to lack of first-team football with his club this season.

Long did come on as a substitute for the Saints on Saturday in their 1-1 draw with Manchester United, however, the brief cameo was not enough to convince the manager to call him into the squad over the weekend.

And McCarthy did have to call in an additional forward following the withdrawal of Sean Maguire, who picked up an eye injury in training last week.

The manager, however, opted to call on Luton Town's James Collins, who has been playing regularly and scored in his side’s 2-1 victory over Huddersfield on Saturday.

McCarthy actually appeared amused at the mere suggestion that Long’s international career was in danger of being over when asked about the player at this morning’s press conference in Abbotstown.

"The chance to play for Ireland is still very much there for him," said McCarthy.

"He has made many appearances and what is he, sixth or seventh highest goalscorer?

"Shane just wasn’t playing, in any games, so my logic is and the way I want players to play is they need to be playing."

McCarthy continued to explain his thinking about what players he selects, and the manager places a very big emphasis on those who are playing regularly with their club,

"I would have thought that if anybody analyses the players that are in the squad, the strikers that I have picked have all been playing," said McCarthy. 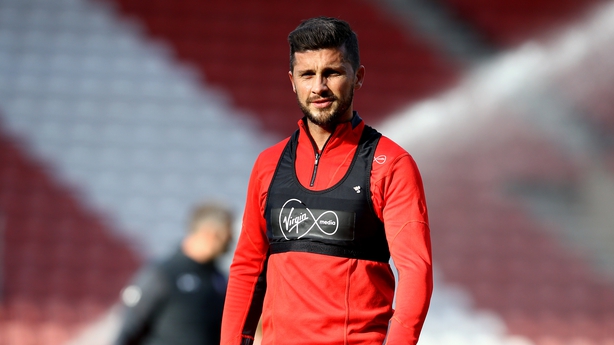 McCarthy, however, admitted that he was actually happy that one of his main players was dropped last weekend.

Shane Duffy has emerged as a real key player for Ireland since Euro 2016 and has been instrumental in helping Brighton remain in the Premier League for the past two seasons.

But the big centre-half was dropped at the weekend as Brighton boss Graham Potter left the Derry native on the bench for their trip to the Etihad Stadium.

As it happens, Brighton lost 4-0 with Manchester City scoring against Brighton's new system within two minutes of the match starting.

And as a result, McCarthy believes that he is getting his player in peak condition ahead of such a vital game on Thursday.

"I think it is brilliant because he is fit and raring to go for me.

"I'm worried going forward that he might not get back in the team if they are not playing really well and that would be a travesty for him, because he has been brilliant for Brighton.

"But they are playing a different system and if the manager thinks the other three are playing better than him, so be it.

"But in regards to this game, it means he’s here, he’s fit, he’s not carrying anything and he should be great on Thursday night."