Mark Travers says there is "great competition" among Bournemouth's goalkeepers after his penalty heroics prevented a Carabao Cup upset against League Two side Forest Green.

Republic of Ireland keeper Travers saved three spot-kicks from the visitors as the Premier League side scraped through 3-0 in a shoot-out following a goalless draw at the Vitality Stadium.

The 20-year-old made two top-flight appearances at the end of last season but England Under-21 international Aaron Ramsdale has since taken over as Cherries number one, with Artur Boruc the current second choice and Asmir Begovic out of favour.

"(We need to) just keep pushing each other on every day - big man (Boruc) and Asmir as well. We work well together," Travers told AFCB TV.

"It's great competition. Obviously Rammers is in goal at the minute, he's doing very well.

"We enjoy these moments together. Even in the Prem games when Rammers pulls off a great save, we enjoy it as well.

"It's great to work with them." 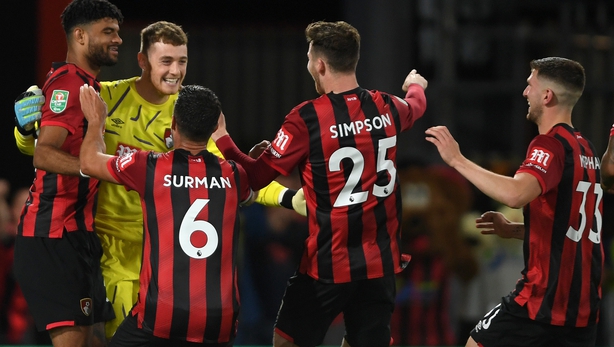 Travers denied Joseph Mills, Kevin Dawson and James Morton from 12 yards on Wednesday evening to set up a third round trip to League One Burton.

"It was an unbelievable feeling to finish with a penalty shoot-out," he added.

"You've got to stay focused and you're always going to make a few saves and thankfully they came in the shoot-out.

"We do a bit (of penalty practice) after training some times, have a bit of fun with it but Mossy (Neil Moss), my goalkeeping coach, he helped me through it, got all our homework done and thankfully it paid off."

Bournemouth boss Eddie Howe expects another stern test from lower league opposition when his side face Nigel Clough's Brewers at the Pirelli Stadium.

"We're in the hat and we're in the round and that's the most important thing," said Howe.

"It'll be a tough game and another very difficult assignment for us.

"When you go away from home, it adds a different challenge so we're going to have to be very good."