A five-goal thriller in Derry that went to the wire, but FAI Cup holders Dundalk JUST find enough to squeeze into the quarters. Watch all the goals from the second-round action on Soccer Republic, Monday night, 7.25pm, @RTE2 pic.twitter.com/prbXZES0Xm

Dundalk missed a golden chance to take a 13th minute lead as Sean Murray's left wing cross was missed by Eoin Toal at the near post, but Pat Hoban’s shot on the turn from close range was saved by City goalkeeper Peter Cherrie.

The deadlock was broken just after the half-hour mark after a goalkeeping error by Cherrie.

Centre-back Daniel Cleary came out from the back and into City’s half before seeing his cross find Daniel Kelly and the ex-Bohemians man’s glancing header caught out Cherrie, who stupidly came off his line, and sailed into the net.

Derry, who were relying on scraps had a half chance on 43 minutes as Ciaran Coll’s left-wing cross found Greg Sloggett, but the midfielder’s header from just inside the box was well off target.

The visitors went close to doubling their advantage early in the second half, but Cherrie redeemed himself when he made a double save to firstly deny Hoban and then keep out Sean Gannon’s follow-up strike.

Derry levelled things on 51 minutes after a sublime piece of football which ended with McCrudden’s clever flick inside the box finding an in-rushing Sloggett, who calmly side-footed home from close range.

The double winners regained the lead two minutes later as Derry again conceded from a corner when Hoban header wasn’t cleared properly and defender Cleary was on hand to turn home the loose ball from close range. 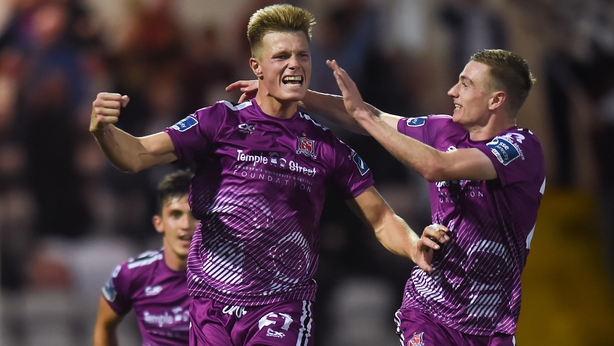 Dundalk missed a golden chance to add a third on 78 minutes as substitute Patrick McEleney found Hoban, but his drive was parried away by Cherrie and Gannon’s rebound strike flew inches wide.

Declan Devine's side pushed forward in search of their second equaliser, which duly arrived on 84 minutes as McDonagh’s right-wing centre into the near post saw substitute Darren McCauley nip in just ahead of Rogers to divert the ball home.

With the Brandywell rocking, the home side were inches away from taking the lead in stoppage time as Coll’s left-wing cross found Ciaron Harkin, but the substitute's looping header, which had Rogers beaten, hit the bar.

Cherrie made a top-drawer save on 103 minutes as Duffy’s corner found Sean Hoare at the near post and his powerful header was kept out by the Derry netminder.

Substitute Kelly won it for the double winners on 117 minutes as Cleary’s high cross from the right to the back post found the former Derry City youngster, who gleefully headed low past Cherrie.