Odsonne Edouard's free-kick gave Celtic a two-goal cushion to take to Sweden in their Europa League play-off against AIK.

The Frenchman curled home from 25 yards in the 73rd minute at Celtic Park to earn the Scottish champions a 2-0 first-leg triumph.

James Forrest had scored in his fifth consecutive game two minutes after the break as Celtic took a major step towards sealing a place in the group stage.

The result was a much-welcome boost for manager Neil Lennon and a Celtic support still hurting from their Champions League defeat by Cluj last week.

After accusing the board of "downsizing" and "gambling 10 in a row" on Saturday, fans in the standing section had another warning for the Parkhead power-brokers.  A banner demanded "Don't Sleep at Wheel" above an image of chief executive Peter Lawwell driving a car with majority shareholder Dermot Desmond in the passenger seat and Lennon in the back.

Celtic soon delivered a signing to the agitated fans with the return of goalkeeper Fraser Forster on loan from Southampton announced during the first half after Lennon revealed Scott Bain would be out for another four to six weeks with his dislocated thumb. 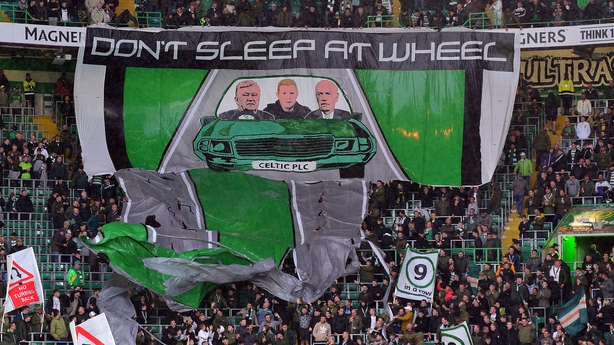 Celtic controlled possession from the start although it took 15 minutes for them to start penetrating the visitors' five-man defence. The first time they did, Edouard was flagged offside after slotting home following a one-two with Ryan Christie.

Celtic's first-half chances came in a flurry. Mikey Johnston had a shot diverted just wide after Boli Bolingoli had created a glorious opening. Jullien soon had a header saved and Edouard was denied after turning and shooting from 25 yards.

The Hoops had two handball appeals rejected in quick succession following a corner and Johnston almost burst through but AIK were proving resolute and they had their own spot-kick claim turned down when Nabil Bahoui claimed he had been held by Simunovic.

Events turned fractious on and off the pitch towards the end of the first half with some of the noisy AIK supporters pushed back by stewards and police as they briefly made inroads towards the home fans.

Celtic started the second half with intent and Callum McGregor had a strike tipped over before Forrest capitalised on the break of the ball following Bolingoli's run and pass. AIK goalkeeper Oscar Linner got both hands to the winger's strike but the ball looped over his head and landed behind the goal line.

Linner soon pushed Christie's shot wide after a positive run from the midfielder before AIK settled down and Gordon saved Bahoui's looping header on his line.

But the crucial second came from one of several free-kicks Johnston won in quick succession after running at the Swedes. Edouard stepped up and curled into the top corner.

Celtic came close to killing the tie off. McGregor shot inches wide after being played through by Edouard and Linner made a triple save from substitute Olivier Ntcham, Edouard and Johnston.