Lionel Messi, Cristiano Ronaldo and Virgil Van Dijk have been shortlisted for the UEFA Player of the Year award.

While Ronaldo, a three-time winner, has been ever-present in the final three since the award was created in 2011, centre-back Van Dijk makes his first appearance after helping Liverpool win the Champions League title last season.

Van Dijk was voted both the Premier League Player of the Season and the Players' Player of the Year, and was instrumental in the Merseyside club's sixth European Cup triumph.

Two-time award winner Messi was the leading scorer in both La Liga (36 goals) and the Champions League (12 goals) last season but his Barcelona side fell in the semi-final stage to Liverpool, who overcame a three-goal deficit in the second leg to advance.

Ronaldo, who has won five Champions League titles, did not fare too well in Europe in his debut season with Juventus, the Italian side losing in the quarter-finals to Ajax Amsterdam.

However, he helped Juve seal their eighth successive league title with 21 goals and was voted the Serie A's 'Most Valuable Player'. 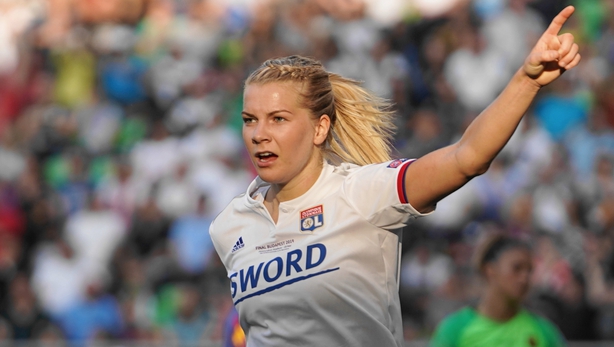 For the women's award, treble-winners Olympique Lyonnais made it a clean sweep with striker Ada Hegerberg (above), right-back Lucy Bronze and midfielder Amandine Henry shortlisted.

Hegerberg was the first recipient of the women's Ballon d'Or last year.

The awards will be presented during the Champions League group stage draw ceremony in Monaco in two weeks' time.