It was the match which defined one of the greatest footballers of his generation and arguably the best to pull on the famous red shirt of Liverpool.

For all his heroics in the 18 years of his professional career those memorable 45 minutes in Istanbul, when Steven Gerrard brought his side back from the dead by leading from the front against AC Milan, will be the midfielder's lasting legacy to the sport he graced so magnificently for so long.

In a 2015 post-match interview after snatching a late winner against QPR, Gerrard was asked whether he had scored a better header.

The midfielder pointed out his one in the Champions League final, which sparked the comeback from 3-0, was not bad.

The reporter admitted he had forgotten that one. "I haven't," replied Gerrard with a knowing smile.

It is the subject the former England international, now manager of Rangers, gets asked about more than anything else.

"Still till this day, the hairs on my neck stand up. It was the best night of my life. It's the pinnacle of every footballer - it's the best cup to win," Gerrard said, speaking four years ago as he approached the final match of his Liverpool career before taking up a new challenge in Major League Soccer with Los Angeles Galaxy.

"The way we went about it and how the evening panned out, I think it'll go down in history as the best Champions League final ever.

"As captain of that team, there was no prouder man on the planet that night.

"By a country mile it was the best night of my career. It was a surreal evening and a surreal game of football and still now it is difficult to describe what happened that night.

"But it was also the whole journey of that season in the Champions League, there were so many ups and down but we managed to get it over the line - but we didn't do it the easy way.

"If you had said to me at 18 years of age I would win the Champions League at 25 and 10 years later I'd be doing interviews about being a Champions League winner I'd have said 'good one, no chance'.

"Looking back, it was a fantastic memory personally and everyone connected with the club." 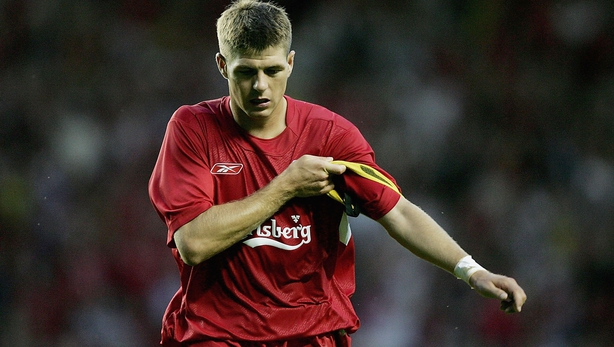 Liverpool had scraped through the group stage thanks to a late intervention by Gerrard against Olympiacos, which the midfielder rates as his most important goal because of what it laid the foundations for.

It was no surprise Milan were favourites going into the game but no-one would have predicted their 3-0 half-time lead following two goals from Hernan Crespo after a first-minute opener from Paolo Maldini.

After that no-one gave Liverpool a hope. The pundits' half-time chat was of damage-limitation but the indomitable spirit of the travelling Red army proved to be an inspiration.

Thousands on the terraces roused themselves from the shock to belt out 'You'll Never Walk Alone' loud enough for the players to hear in the bowels of the Ataturk Stadium.

It was a call to arms, an anthem of defiance, of belief, of hope.

The players, with Gerrard at the forefront, heard the message and ran with it leading to their famous victory on penalties.

Pivotal to the turnaround was the switch in tactics by manager Rafael Benitez, who brought on holding midfielder Dietmar Hamann to regain some control and also free Gerrard to charge forward.

"It was the greatest night of my career as it is the biggest prize in club football," the German said.

"The way we won it, for a foreigner like me to win it with Liverpool, for the fifth time after 21 years and see all the happy faces when we came home was a special night."

"It was such an iconic game not just for Liverpool but for football in general," he said.

"It is very rare you go too many days without someone reminding you of it. I was very fortunate to be involved and very proud.

"It was like a film. As soon as the final was over I am sure there were people thinking about books and films.

"Considering some of the results we had along the way it wasn't a vintage season in terms of the league that year, we lost to Burnley in the FA Cup as well so to win the European Cup at the end of the season was a dream."