After finding themselves on the back foot for much of the second-half, Vinny Perth's side were edging towards a scoreless draw but they were undone with four minutes to go when Holman tapped home after substitute Dejan Drazic's strike came back off the upright.

Dundalk did fashion a late opportunity to bag a priceless away goal when John Mountney saw a header clawed onto the crossbar and they will have to dig deep in Tallaght next week to turn things around. 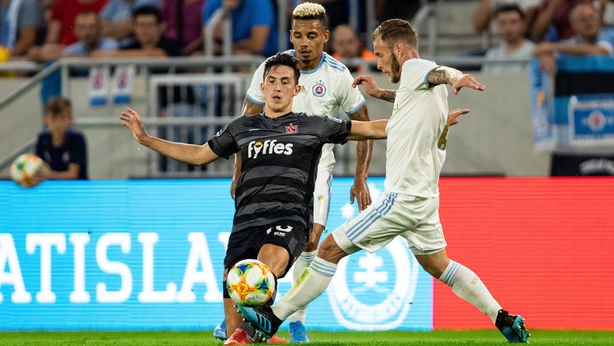 The Dundalk head coach made a couple of big calls with his team selection.

Patrick McEleney was relegated to the bench with Mountney deployed wide on the right while Sean Murray replaced Sean Hoare in the engine room.

The Slovak side was made up of 10 different nationalities with full internationals from four different countries in their ranks and they took the game to Dundalk from the off.

The League of Ireland champions defended well, however, with the only real moment of concern coming in the 12th minute when Moha's cross took a wicked touch off the top of Chris Shields' head but Rogers dealt with it capably.

With temperatures still in the high 20s at kick-off, possession of the ball was paramount for Dundalk but a number of misplaced passes and unforced errors hindering their chances of getting into any sort of rhythm.

A lapse in concentration by Slovan almost opened the door for them just shy of the half-hour. Jamie McGrath's clipped pass invited Patrick Hoban to run into space behind the back four but his first touch was heavy and the hosts regrouped to clear.

Holman showed his class in the 28th minute with a delicious pass that located Rafael Ratao on the inside left channel but his ball across goal evaded the white shirts in the penalty area.

The Lilywhites responded with their best spell of the half. Mountney's slide-rule pass found Duffy but Dominik Greif got down to scoop the winger's effort over the top. From Murray's corner, Andy Boyle's header was blocked by Marin Ljubicic.

French referee Frank Schneider became the target of jeers from the Slovan Ultras when he waved away three penalty appeals in the second half.

With the volume in the stadium rising, the Slovakian champions upped the tempo and Dundalk's goal survived a flurry of chances, with Jurij Medvedev hitting the side netting.

Dundalk created a glorious opening in the 61st minute when Hoban picked out McGrath in the penalty area but he dragged his shot wide of the goal after flat-footing Vasil Bozokov.

Slovan went again and Rogers produced a stunning save in the 70th minute, tipping Marin Ljubicic's header over, but he was helpless to stop the winner, Holman having the easy task of slotting home after Drazic's effort crashed off the post. 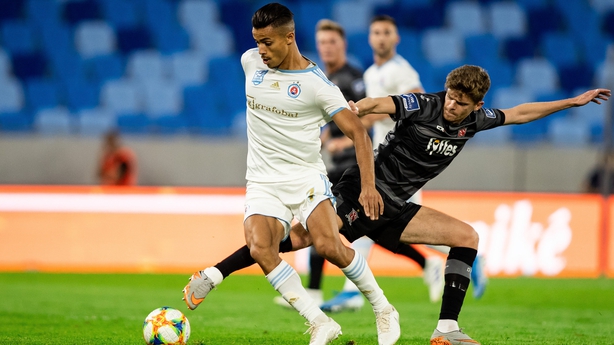 Dundalk created one final chance and the tie could have taken a different complexion had Greif not made a brilliant stop to keep Mountney's header out in the dying stages but with the rain and wind battering the stadium, the final result felt like the right one.