(Apollon win 4-3 on aggregate after extra-time)

The Cypriot side edge through to meet Austria Vienna in next week’s third qualifying round.

As they did on their previous three games in the competition, Rovers showed their mettle in coming from behind for a fifth time here with the goal of the game from Aaron Greene.

On this occasion it wasn’t to be as the multinational Apollon were mightily relieved to squeeze through.

Roared on by a band of 104 Hoops faithful in the crowd of 2,981, Rovers started positively with Ethan Boyle getting forward on the right inside the first minute, though he overhit his cross.

Unbeaten in their last nine qualifiers at home, Apollon soon settled with Emilio Zelaya forcing a fourth minute corner from a free kick.

It was taken short by Zelaya to Yannis Gianniotas to pick out Diego Aguirre, who shot narrowly wide.

Apollon then enjoyed a good spell of possession, forcing a second corner, before making it tell on 18 minutes to take the lead on the night and in the tie.

Impressive midfielder Gianniotas looped a cross in from the right to the far post and Argentine Zelaya, who scored four times in the last round, out-jumped Rovers keeper Alan Mannus to head to ball to the net for a soft goal for Rovers to concede. 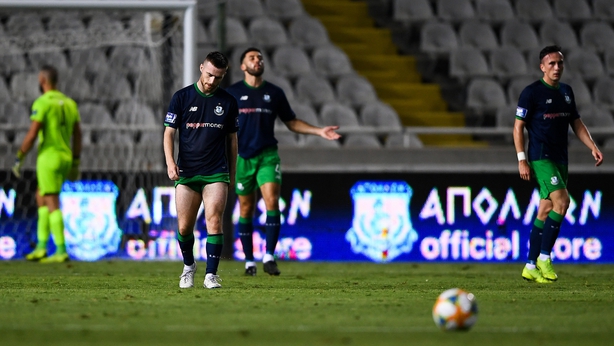 Needing to striker back now, Rovers upped their tempo with Greene straying offside a couple of times before Roger Tamba M'Pinda saw yellow for chopping down Jack Byrne.

Trying to play out from the back, Rovers gifted Apollon a chance to double their lead just past the half hour.

The former Togo international’s powerful drive was parried by Mannus with skipper Fotis Papoulis, their scorer in Tallaght, unable to capitalise on the rebound before the Hoops’ keeper gathered the loose ball.

Mannus then excelled with the save of the half on 35 minutes.

Gianniotas was found in room just over 20 yards out and looked to find the top corner with a curling right-foot shot with Mannus going full stretch to his left to push the ball out for a corner.

Mannus was worked again three minutes before the break, tipping over the bar from Zelaya’s thumping free kick from some 35 yards out.

Thanks to Greene’s hard running up front, Rovers began the second half on the front foot to enjoy their first real spell of possession. 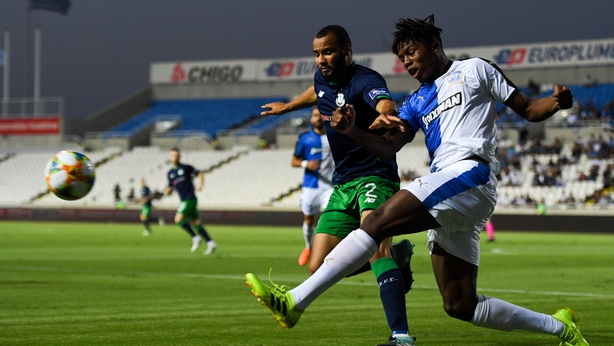 Roger Tamba M’Pinda relieved the pressure on Apollon with a surging run and shot that Mannus got down well to hold.

Despite Rovers’ bright start on the resumption, Apollon doubled their lead from their second corner of the half on 64 minutes.

Zelaya’s deep corner found Diego Aguirre whose shot was parried by Mannus. Hungarian Attila Szalai, just on the pitch, followed up to blast home the rebound.

But the game changed in a madcap couple of minutes soon after. First Sean Kavanagh and Fotis Papoulis tangled on the near touchline. The Rovers’ left-back was yellowed carded with the Apollon skipper shown a straight red.

When that calmed down Rovers pulled a goal back to level the tie on aggregate on 68 minutes. With little on, Greene struck a sublime shot from 25 yards that arrowed into the top left corner of Joel Mall’s net for a stunning strike.

The remainder of the 90 minutes, plus five minutes of added time, failed to produce anything of note.

Apollon then struck for their winner on 101 minutes. Zelaya threaded a ball through for the run of substitute Adrian Sardinero, who drilled his shot across Mannus to the far corer fo the net.

Rovers substitute Dylan Watts had a late chance, but saw his volley from Kavanagh’s cross pushed out by Mall.