Dundalk's quest to reach the third qualifying round of the Champions League ended with a 3-0 defeat away to Azerbaijani champions Qarabag.

A 1-1 draw in the first leg gave the Lilywhites some hope but they were out of their depth here, goals from Romero (two) sandwiched by an Ailton header on a night to forget for the Irish champions.

They could have lost by far more but must now regroup for the Europa League next week where they will take on Slovan Bratislava of Slovakia.

The Irish side will have to put this behind them quickly but can at least reflect on how good Qarabag were – possibly the best side they have faced in European combat this century.

The Lilywhites made one change from the side that started in the first leg, with Daniel Cleary coming in for the injured Robbie Benson, Sean Hoare moving into midfield and sitting alongside Chris Shields in a deep role.

Cleary was possibly their best player in a first half where they struggled to keep hold of the ball. How the Lilywhites went in just a goal behind defied logic, yet at least it kept them in the tie, and Vinny Perth could point to a similar battering in the opening half in Oriel. 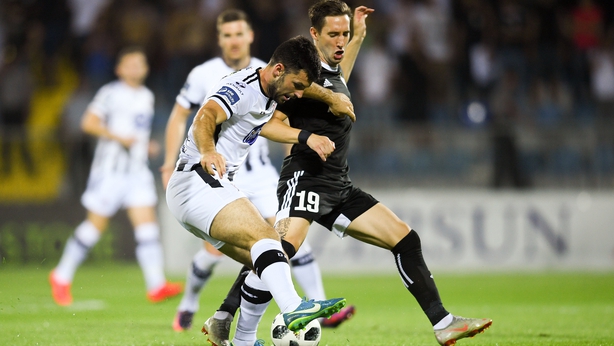 They should have been behind within a minute, Rahil Mammadov heading over from a corner that followed Gary Rogers' outstanding save from Mahir Emreli.

It was pretty relentless – save for a Hoare header that was safely gathered by Vagner – and Dundalk had no idea how to cope with the quality of the Azeris, cheered on by a raucous home crowd.

The lead goal came on 12 minutes, Romero placing  a beautiful effort past the despairing Rogers after Abdellah Zoubir picked him out with a selfless pass.

It was all Qarabag, Dundalk's players constantly looking to the bench for some sort of reassurance as Perth embodied calmness. Zoubir came close to making it 2-0. Ozobic went off injured after battering into Shields from Zoubir's cross.

Patrick Hoban, isolated, gave away possession on 29 minutes and Zoubir almost made it 2-0, but for a block from Cleary.

The Lilywhites were just about staying alive but were lucky that Zoubir blazed wildly over shortly before the break. 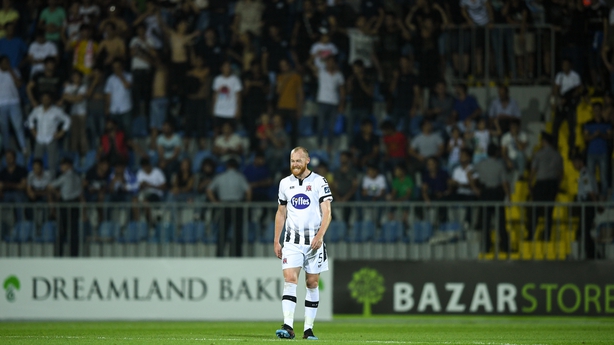 Substitute Dani Quintana's shot seemed to be deflected, Rogers beaten, as the second half resumed in a manner consistent with the first.

A poor Cleary header should have been punished on 53 minutes. Zoubir laid off to Mahir Emreli but brave Rogers produced a life-saving block.

Sean Hoare went off and Sean Murray came on after 56 minutes as Perth looked to make something happen.

Dundalk did enjoy a little spell after Murray came on but failed to create anything of note. The midfielder showed excellent defensive nous to make a telling block on 63 minutes as Romero was about to pull the trigger; then Ailton forced Rogers to tip over from a corner.

Dundalk's first chance came midway through the half. It was lovely play too, Sean Gannon teaming up with Jamie McGrath before crossing to Hoban, whose flick was gathered by Vagner.

Mountney cleared off the line from a header from Ailton as Dundalk clung on for life.

The tie was effectively decided with just under 15 minutes left as Michael Duffy's poor clearance was punished, Maksim Madvedev crossing for Ailton to head home.

Romero made a bad might worse for Dundalk with a deflected drive with three minutes left. He showed good composure to rattle home.

The main negative on the night for Qarabag was crowd trouble in the second half, several fans seemingly ejected from the crowd after clashing with police. They march on to face APOEL, while it is Europa League next week for Dundalk. 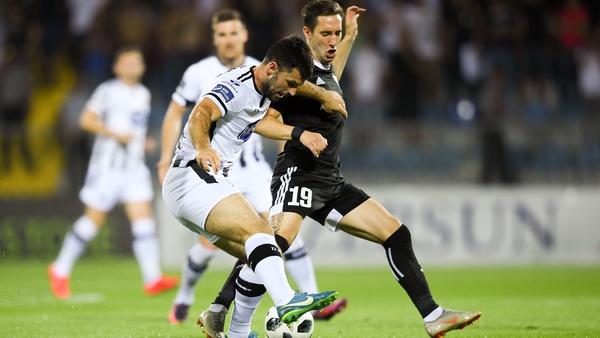