Real Madrid finished their tour of the United States with a 7-3 humiliation by rivals Atletico Madrid in New Jersey on Friday, ensuring they head home in embarrassment from their American excursions.

Their tour started in pretty underwhelming fashion with a 3-1 defeat to Bayern Munich in Texas, before they then fell 2-0 behind against Arsenal inside 24 minutes in Washington DC on Tuesday.

They fought back in the second half to rescue a 2-2 draw, eventually winning on penalties, but against their city rivals in their final match, Real's pre-season toils really unravelled.

Diego Costa struck in the first minute to stun Real, who found themselves three down before the 20 minute mark, and five down by the interval.

Real's beleaguered backline, which was not by any stretch a second string with captain Sergio Ramos and Marcelo starting, could not cope with the combative Costa, who finished the match with four goals, before being sent off.

Late goals from Karim Benzema and Javi Hernandez ensured Atletico did not better their biggest competitive victory over Real - 5-0 in the 1947-48 season -- but the damage had been done.

Real's defending will certainly be of great concern to coach Zinedine Zidane, having seen his side concede 12 goals in three games in the US, but there were very few other positives to take from the trip.

New big-money signings Eden Hazard and Luka Jovic, who have featured in all three games, mustered just two shots at goal between them in the US. 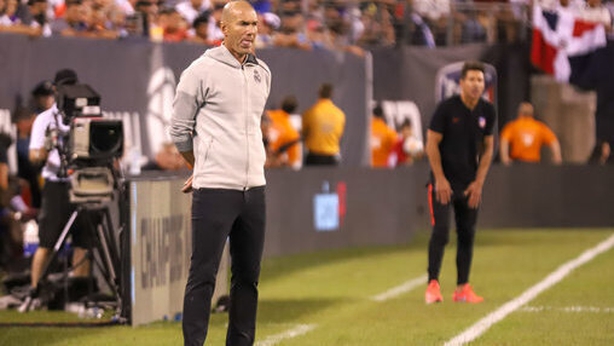 "There was no response from us to change something," Zidane told reporters after the match.

"The first part was difficult. We never entered the game. We have lacked everything, especially intensity.

"You don't have to spin it over. It’s a pre-season game. They’ve been better at everything. There is nothing more to talk about. We are preparing a season and being calm."

While Zidane is right that there is only so much you can read into pre-season results, Real's preparations for the new La Liga season could not have gone much worse.

Zidane's thoughts have been dominated by Gareth Bale's future since the Frenchman admitted that the club were trying to sell the Welshman, with every press conference since involving yet more questions about where Bale's future lies.

There are still pre-season games left to try and generate some momentum ahead of start of the Spanish season on August 17, but so far, it has not been Real or Zidane's summer.