European first legs have a tendency to be dull, sterile affairs with two tentative teams aiming to take the tie to the deciding return encounter.

But Shamrock Rovers' recent form suggests that their Europa League second qualifying round tie against Apollon Limassol will be anything but, as the Hoops welcome the Cypriot side to Tallaght Stadium

Seven goals were scored in Rovers' last European outing, as they battled past Norwegian side SK Brann 4-3 on aggregate, inspired by a valiant 2-2 away result in Bergen, including a last-minute equaliser from Roberto Lopes.

Stephen Bradley's side matched that tally in one league game, rescheduled for last Sunday, as UCD took the full brunt of a free-flowing Shamrock Rovers’ performance, the Students losing 7-0 at Tallaght Stadium.

Rovers have enjoyed a remarkable season so far. They raced into a commanding lead atop the SSE Airtricity League Premier Division as they attempted to end the Dundalk dominance.

They have stumbled, of course, most notably as their Achilles Heel continued to damage the credentials of this emerging Rovers team, losing twice to rivals Bohemians. That allowed Dundalk to bridge the gap and then move clear as normal service resumed in the top tier of the League of Ireland. 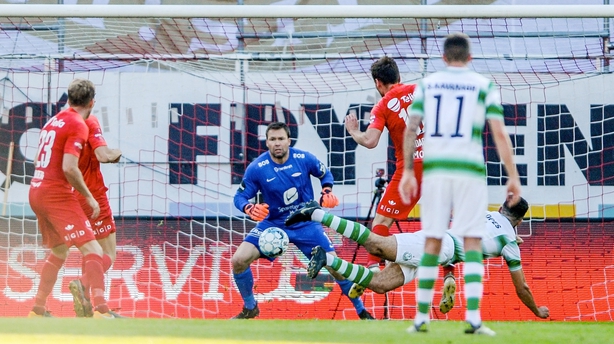 But Bradley has his team playing with a style not seen in green and white circles since the famous four-in-a row side of the 1980s and, while still very much a work in progress, confidence has really been built and maintained over the past few weeks – even the recent 0-0 draw with Sligo Rovers was a truly dominant display by the free-flowing Hoops.

Sunday’s thrashing of the Students was a result that had been threatening to arrive all season and UCD failed to weather that particular perfect storm.

Bradley will surely look for more of the same when he sends his men out to take on a Cypriot side who are still working their way through pre-season.

The Hoops will surely maintain the attacking formation that allowed them to put in such an assured performance in the away leg in Bergen, followed up by the impressive outing in Tallaght to secure safe passage through to this round.

The three-man defence really allows the wide men to attack the flanks, while a full midfield also sees a variation, playing through the middle.

Rovers are actually at their most potent when they take this more testing route, bringing out the best of key man Jack Byrne, who continues to impress.

After a plethora of fine performances throughout the season, perhaps Byrne’s most magical moment came in that second leg as the Hoops needed to score having gone behind against the run of play.

Running beyond the ball and into the box, Byrne took a pass from Ronan Finn on the turn, in perfect motion before slamming home the equalising goal.

Byrne would then set up the winner to guide Rovers to a 2-1 win on the night, and it is no wonder that he has been lauded as the main man by fans and pundits alike.

"He makes Rovers tick," said Paul Corry, speaking on the RTE Soccer Podcast. "And in European games you get the feeling that Rovers are waiting for him to step up, and he duly did.

"His ability to open teams up and his ability to finish with something is probably what differentiates him to other number 10s that we have in this league.

"There is a lot of pressure when you are in that position to create chances and score goals and he has done both of those this season.

"And you would imagine if they are to have any chance, it is going to be very much on Jack’s shoulders, the supply line into him and what he can do with the ball from there."

But Rovers are far from a one-man team and another midfield man is perhaps just as important in allowing the Hoops to play the way they are at the moment.

Greg Bolger sits deep in front of the back three and the former Cork City midfielder has been immense in the central role this season, really emphasising his importance in the recent European fixtures.

This team can only get better heading into tonight’s clash with Apollon, with the return of Aaron McEneff a huge bonus for Rovers; the former Derry man’s absence through injury coincided with the Dublin side’s loss of form.

While tonight's opponents have yet to begin their domestic campaign, they encountered very few problems in the first round of the competition, easily accounting for Lithuanian side Kauno Žalgiris 6-0 on aggregate.

So they will also bring confidence into the game, coupled with the fact that they compete in a superior domestic competition to Rovers.

Like Rovers, Apollon finished third in their league last year, and while they were only two points off the lead when the competition split into a top six, bottom six format, by the end of the campaign they were a long way off champions APOEL.

Having bagged six against the Lithuanians, Apollon will be both capable and confident of scoring against a side who made some basic defensive errors in the recent games with Brann.

Emilio Zelaya will be the one to watch in Tallaght as the Argentine striker scored four of their six goals in the first round.

The Cypriots should prove more technical and less physical compared to Brann, but if Rovers are to have any real hope of progressing, they will surely need to make a statement in the home leg, ideally keeping their visitors scoreless in the process.

The second leg will be played in the summer heat of Cyprus next week and by that stage the home side will have another week of pre-season under their belt and should prove a much tougher proposition.