Manager Tom Mohan praised the courage and skill of his team as the Republic of Ireland secured a semi-final spot at the U-19 European Championships after a 2-1 victory over Czech Republic.

Although Jonathan Afolabi's opener was cancelled out with 11 minutes remaining, Barry Coffey popped up within 60 seconds to secure a first win in the group and second spot in Group B.

The Boys in Green will now face Portugal in Wednesday’s semi-final (live on RTÉ2 at 3pm) and Mohan cut a very satisfied figure post-match.

"I’m full of pride at the minute. The boys were fantastic. Even when it was backs to the wall, they dug so deep," he said.

"We had to try and play out against a really aggressive team who were so well organised. They put their foot on the ball in the middle period of that second half when we needed fellas to stand up.

"As well as the courage, the quality they showed. It reflects the spirit in the camp and they are great fellas. We are absolutely delighted."

The only negatives of an otherwise triumphant evening were the second bookings of the tournament for Lee O'Connor and Afolabi. Both yellow cards were late in the game and harsh but cannot be appealed and so rule the pair out of the semis.

"They are big, big players," Mohan said. "It’s a bitter one at the moment, but we we’ll not let that affect the joy of tonight."

Republic of Ireland manager Tom Mohan is "full of pride" after watching his team win to make the last four at the U19 European Championships. #U19EURO pic.twitter.com/vNmV8BmHEO

RTÉ soccer analyst Alan Cawley was adamant both yellow card decisions were incorrect and hugely disappointing for the players involved.

"I don’t want to be negative, but it’s an absolute disgrace. I’m gutted for them."

The card for captain O'Connor, who was booked for perceived time-wasting with a free-kick, was particularly galling according to Cawley.

"All it takes is a bit of common sense from the referee to warn him and have a little word.

"He came off the field crying. For a semi-final appearance to be taken away from the kid because of the ineptitude of a referee is really, really disappointing." 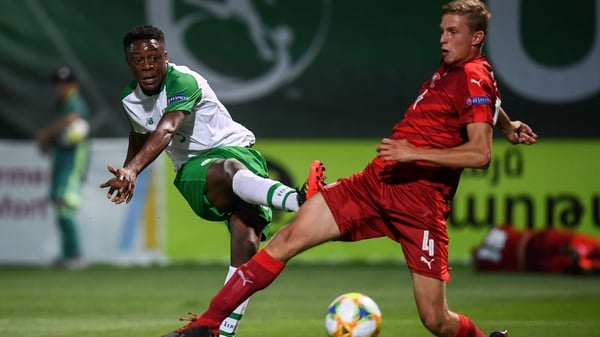