A bad week for Bohemians finished on a high with this 3-0 victory over St Patrick's Athletic at Dalymount Park in the SSE Airtricity Premier Division – even if it wasn’t quite as emphatic as the scoreline suggests.

A poacher’s finish from Ryan Swan three minutes before half-time knocked the stuffing out of the Saints, who huffed and puffed in the second period before the hosts made sure of all three points courtesy of Conor Levingston’s 82nd-minute penalty and Swan’s second in injury-time.

Having lost to UCD on Monday night, that defeat was then compounded after getting hit with a fine from the FAI for fielding an ineligible player in said fixture.

The influential Danny Mandroiu was due to serve a suspension but an administrative oversight on the club's part meant manager Keith Long was not informed.

Mandroiu's ban was carried over as a result and, while Bohs toiled for long periods here, they got the job done to extend their lead over Pat’s to eight points.

The Saints returned from Sweden, where their Europa League adventured ended on Thursday night, and while they were the brighter of the two sides in the opening exchanges the story of this game could be told with two first-half headers. The first, from Mikey Drennan, was well saved by James Talbot.

The Bohemians goalkeeper was alert to the danger in the box and showed sharp reflexes to push the striker’s effort away from danger after Darragh Leahy’s attempted clearance dropped invitingly from the air.

It looked as if it would be the only effort on target of note in what was a largely uninspiring opening 45 minutes but, just before the interval, a defensive lapse in concentration in the visitors’ box was punished by Swan.

Like Drennan at the other end, the Bohs front man was sharp to sniff the opportunity and he was rewarded for these instincts as a mix-up between Lee Desmond and goalkeeper Brendan Clarke allowed him poach a looping header into the net at the near post. 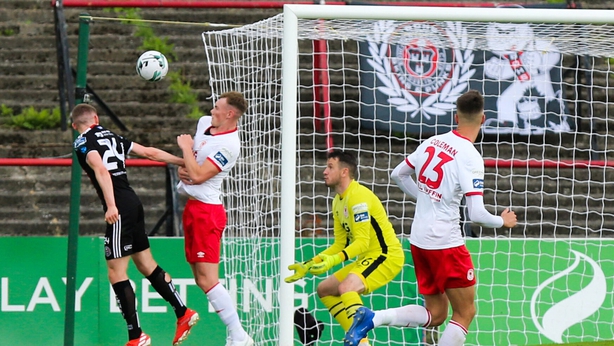 Pat’s were stung but their response after the break was limited.

Cian Coleman fired a wild long-range shot well wide, Drennan rifled a decent effort just over the bar while substitute James Doona hit the side netting from an acute angle on the left flank.

The pressure was beginning to build until referee Rob Rogers pointed to the spot for a handball in a crowed box.

Jamie Lennon was booked for his protestations and his mood won’t have been helped when Levinsgton sent Clarke the wrong way.

Swan then had an easy tap in in the second minute of injury-time after reacting first to a Clarke save as Bohs’ week finished with three much-needed points.