Teenager Mason Greenwood fired Manchester United to victory against Inter Milan on a night that saw Ashley Young subjected to loud and frequent jeers by fans in Singapore.

The build-up to Saturday's International Champions Cup clash at the National Stadium has been dominated by the Serie A side's public interest in Romelu Lukaku.

But as a knock ruled out the Belgium striker for a third straight friendly, 17-year-old Greenwood again underlined his quality by coming off the bench to seal Ole Gunnar Solskjaer's United a 1-0 victory.

The forward also hit the bar after coming on with a third of the game remaining - one of 10 changes made at that stage in sweltering Singapore.

Young, who captained the side for the majority of last season, was another to be brought in and heard his named booed loudly when it was read out by the stadium announcer. The 34-year-old continued to be jeered on a night that ended with United racking up their third pre-season win.


A sea of red welcomed the sides at a sold-out National Stadium, where Solskjaer's name echoed around the ground as United made a positive start.

Marcus Rashford started well and Luke Shaw went agonisingly close to opening the scoring with a fizzing, low drive. Anthony Martial and Rashford were denied by Samir Handanovic as United continued to edge proceedings that included a water break on the half-hour mark.

Daniel James wasted a good chance and Martial had an attempt, with Danilo D'Ambrosio going closest for Inter as David De Gea, making his first appearance of the tour, flapped. 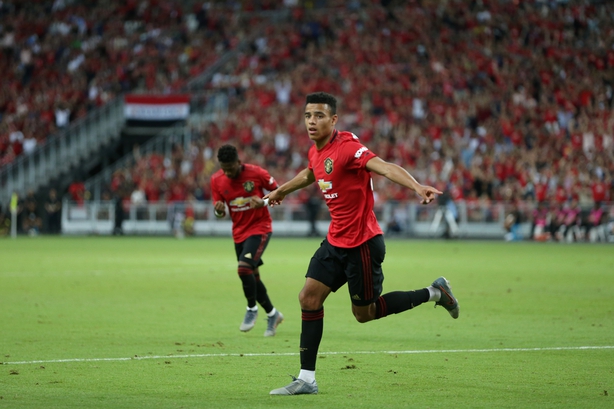 Martial got fans on their feet before Lingard saw a strike cleared off the line, while Nemanja Matic hit the post. Pogba was impressing and Aaron Wan-Bissaka cleared off the line when Inter jolted into life, with former United target Ivan Perisic going close soon after.

Victor Lindelof was replaced by Phil Jones after appearing to pick up a slight hamstring issue and Solskjaer soon made sweeping changes.

Young was among those brought on and his named was booed when it was read out. The full-back continued to be jeered and the only respite appeared to come when he had a shot, including the free-kick that led to Greenwood's second United goal.

Handanovic could only parry Young's attempt, with the 17-year-old taking the loose ball and then a smart touch away from danger before firing home a lovely left-footed strike.

Greenwood soon saw an effort clip the top of the bar after meeting a cross from Tahith Chong, who was among numerous players getting rough treatment without protection.

Solskjaer did not looked pleased on the touchline - unhappiness that only grew when Chong fell to the deck in pain after a few minutes.