Yoyo Mahdy's brilliant early goal was sufficient to maintain UCD's revival as they frustrated third-placed Bohemians at the UCD Bowl.

Despite the loss of several key players following an 11-match losing run that saw them slump four points adrift at the foot of the table 10 days ago, two wins and a draw from their last three matches moves Collie O’Neill’s Students three points clear of bottom side Finn Harps.

Unchanged from their battling 0-0 draw in Derry on Friday, UCD started brightly and got what would prove the game’s only goal from the first attack of the night on eight minutes.

Home skipper Paul Doyle was initially involved before Mahdy harried James Finnerty to snatch the ball off the Bohemians’ defender.

The UCD striker then got his head up to hit a stunning right-foot shot to the top corner past James Talbot from some 25 yards out for a cracking fifth league strike of the season.

It was close to matching Bohemians’ striker Danny Mandroiu’s goal in a 2-0 win for the Gypsies when the side last meet a the same venue back in February.

And it was Mandroiu who posed the first threat to UCD again here, firing over from a free kick on 17 minutes.

A minute later he got in behind the home defence from Keith Ward’s clever ball only to scuff his shot on the turn wide across goal.

It nonetheless sparked Bohs to life with Mandroiu once more shooting off target following a short corner.

Mandroiu then played Ward in over the top for Bohemians' best chance of the half on 22 minutes. The cross found Kevin Devaney at the back post with his drive being well saved at close range by the alert and well-positioned Conor Kearns.

With frustration growing among Bohemians fans, Finnerty was close to redeeming his early lapse with a marauding run on 41 minutes. 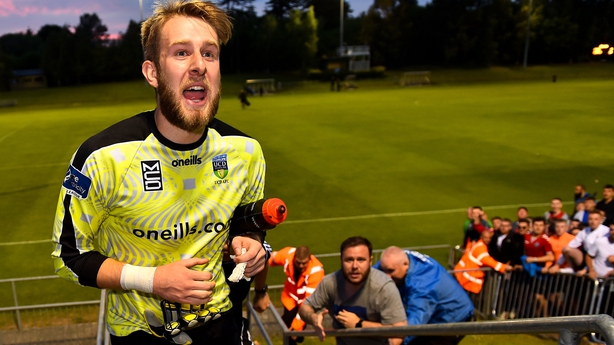 Working a long-range one-two with Devaney, the Gypsies' defender galloped in behind the home rearguard, though his shot failed to really work Kearns who saved comfortably.

Evan Farrell then showed his defensive awareness to get across to nick the ball off the toe of Mandroiu after Ward’s quick free kick put him in on goal in first half stoppage time.

Ward’s tenacity in chasing a long ball brought Bohemians the first chance of the second half seven minutes in.

Racing between Farrell and Harry McEvoy Ward’s clever lob brought a finger-tip save from Kearns.

Four minutes later, the hardworking Ward crossed for Luke Wade Slater in space inside the area. The midfielder wasted the chance, though, failing to make good contact with an attempted diving header.

Some Mandroiu magic then brought the best out of Kearns on 70 minutes.

Skilfully beating his marker, Mandroiu hooked in a left-foot shot that Kearns back-pedalled to tip over his crossbar.

His header was straight into the grateful arms of Kearns.