Ireland goalscorer Joe Hodge stressed the importance of not losing the first game of a tournament after the Under-19s came from behind to earn a 1-1 draw with Norway in Yerevan.

Tom Mohan's side struggled in the opening exchanges in their first group game of the Armenia-hosted Under-19 European Championships and found themselves a goal down to an impressive Norwegian unit with just eight minutes on the clock.

But the much-changed Irish side - many of the squad were unavailable due to club committments - eventually found their stride and were rewarded with a late equaliser thanks to Joe Hodge's fine strike from outside the box in the 81st minute.

"It felt really good to get the equaliser, but it was important that we got a point," said Hodge, speaking after the game.

"We didn't want to start with a defeat in the group stage, and we got a point, so it was not as bad as it could have been." 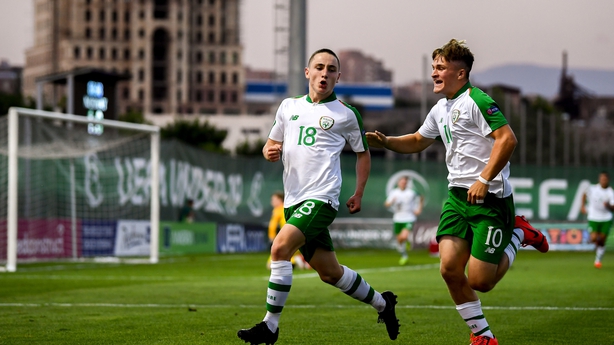 Hodge admitted that the team took time to get going in their first Group B encounter, but said that he felt the side improved as the game went on, which led to his chance to earn a point late in the game.

Ireland now go into their second group game against leaders France, who easily accounted for the Czech Republic 3-0 in their opener, and the point earned against Norway could yet prove vital in the battle for the semi-final places.

"We didn't start as well as we could have. The lads have more quality than what they showed in the first 15 minutes. But we started to improve and it ended up being an alright performance in the second half."

Hodge made his Ireland Under-19 debut against Norway but the Manchester City prospect has plenty of European experience having starred for Ireland in the Under-17 equivalent earlier this summer.

And Hodge believes that the Ireland-hosted tournament benefitted his own game as well as helping with the team's approach to this two-week event in eastern Europe,

"I think it helped my tournament experience, and knowing how important it was not to lose the first game, which is important in tournament football.

"Hopefully we can build on the draw going into the next game."

Meanwhile, coach Tom Mohan admitted that he would have taken a point following his side's disappointing start against the Norwegians.

"After ten minutes we'd have settled for a point," said Mohan.

"Because Norway, they pushed us right back and they overloaded areas, they hit big [diagonal passes] and they took advantage of some of our smaller players with their physicality.

"Their press was very strong and we found it difficult to play out against their press."

"After ten minutes we would have settled for a point...but once the boys settled down, they showed great character, and thankfully Joe came up with the goods..." - Ireland Under-19 coach Tom Mohan was happy with his side's opening performance in Armenia. pic.twitter.com/q2h4TVHutB

"Once we got the water break and the boys settled down a wee bit, there was a bit of frustration in there too you know but they showed good character.

"The boys got on the ball in the second half and they kept moving it and we felt like once we keep moving them, openings would happen.

"Thankfully Joe came up with the goods, it was a fantastic strike from a fantastic player. Seventeen years of age, you can't ask much more."