Joe Hodge marked his Republic of Ireland Under-19 debut with a crucial equaliser to earn a draw against Norway in their opening match at the European Championship finals this afternoon.

Norway sped into an eight-minute lead in Yerevan through Erik Botheim but 17-year-old Hodge, eligible for another two seasons at this level, smashed in a sweet low drive home from 25 yards on 80 minutes.

Ireland are next in action on Thursday against France, live on RTÉ2, before they conclude the group by meeting Czech Republic on Sunday. The top two teams progress to the semi-finals at the eight-nation showpiece.

Already without a dozen players due to their clubs refusing to release them, Mohan went into his first game also missing Tyreik Wright due to suspension.

Kameron Ledwidge was pushed up from left-back onto the wing, affording Jack James a start at full-back.

Norway's tactics on relying on their wing-backs for width kept both James and Andy Lyons on the other side busy in the early stages.

The Scandinavians, who finished fifth at last year's tournament, capitalised on the pressure of the opening exchanges by soaring into the lead.

When Ireland failed to deal with Halldor Stenevik’s deep cross to the back, Edvard Tagseth squared the ball across the six-yard box for Botheim to stab home his first-time volley.

8mins Erik Botheim hands Norway an early lead as Ireland fail to deal with a good ball in from the right.#RTEsoccer

Hodge flanked captain Lee O’Connor in the Ireland midfielder, with the duo from the Manchester clubs gradually getting a foothold.

Ali Reghba too, on the right wing, began to get more joy. The recent Leicester City recruit raided into space but squandered his cross, hitting it straight at goalkeeper Kristoffer Klaesson. Jonathan Afolabi was similarly wasteful on 15 minutes but this time there was nobody to pounce when Klaesson fumbled the centre.

Reghba created Ireland’s best chance of equalising in the first half. Another bursting run from deep saw him sprint into the box but he was foiled by a last-ditch tackle from Manchester City defender Colin Rosler. 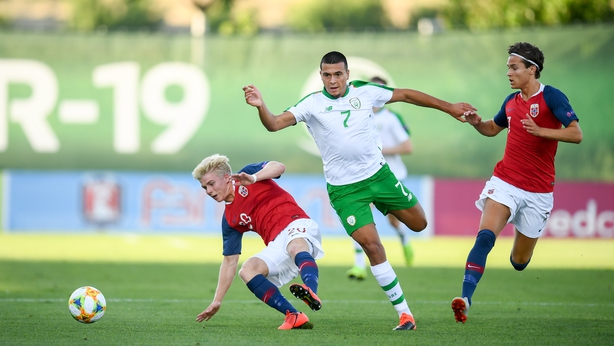 Early in the second half, Afolabi forced Klaesson into his first save of note. Ireland’s lone striker powered past two defenders and his left-foot strike got turned around the post by the netminder.

Ireland kept pressing, with the introduction of Matt Everitt adding some vibrancy to the attack. They got their reward with 10 minutes left when Hodge delivered the leveller.

81mins Joe Hodge with a cracking strike from 25 yards to equalise against Norway at the Under-19 European Championships.#RTEsoccer

Reghba was again to the fore, nipping past his marker on the right and sailing in a cross which Rosler only half-cleared. Hodge was first to react, controlling the stray ball 25 yards out before burying a crisp drive into the bottom corner.

Both sides had a couple of half-chances to nick the win but the Norwegians came closest. A dipping shot from substitute Mikael Ugland left Maher static and he was relieved to see the effort clatter off the post.

Watch the Republic of Ireland v France at the UEFA European Under-19 Championships on Thursday from 5.45pm (kick-off 6pm) live on RTÉ2. 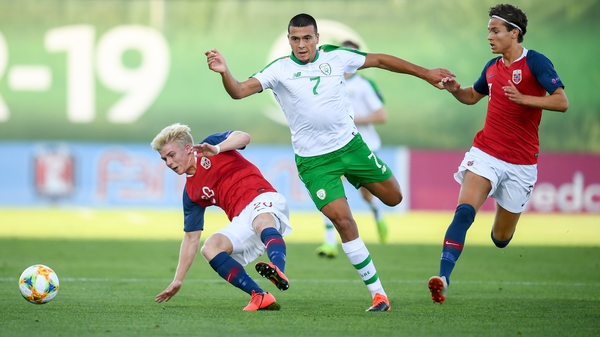