The Republic of Ireland's Under-19s have been told the grasp the opportunity of showcasing their talents on the UEFA European Championships stage.

The build-up to Ireland’s first appearance at the tournament for eight years has been overshadowed by a glut of withdrawals.

Several gems who helped Ireland hold the distinction of being the only one of the eight teams in Armenia with a perfect qualification record of six wins haven’t made the trip.

The likes of Troy Parrott, Luca Connell, Adam Idah and Nathan Collins have not been released by their clubs. It means manager Tom Mohan has been forced to dig deep into the talent pool within the FAI’s underage structures, with half of his 20-man squad young enough to figure in future campaigns at this level.

Ireland open their Group B campaign on Monday against Norway before facing France three days later and concluding against Czech Republic on Sunday.

A top-two finish would secure them a semi-final place, a feat achieved by the class of 2011 that included Jeff Hendrick, Matt Doherty and John Egan.

"It’s very disappointing that the boys have been part of it all season and not be here," admitted Mohan on Sunday as he sat in the shaded part of the sun-baked Republic Stadium in Yerevan.

"We were waiting up to the last minute before confirming the squad. Clubs were planning for pre-season too.

"We have to take it on the chin and wish the players the best of luck. It’s a sign of them doing well at their clubs.

"The players would love to be in both places but they can’t. That’s life. 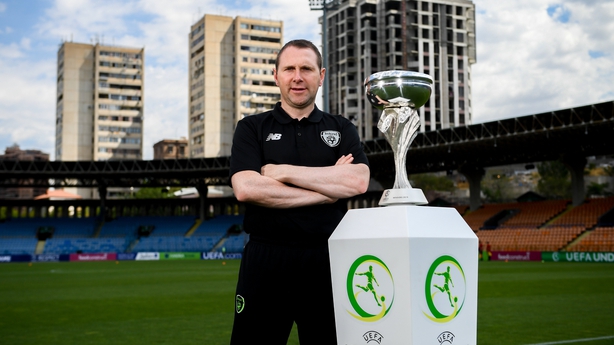 "The reality is that it’s very seldom will you have the same squad twice in a row. Fellahs stepped in during the second phase of qualifiers in March and helped us win all three games. Some of the newer ones this week have done really well in training.

"This is a major tournament across Europe and the boys can’t wait to get into the action."

One of Mohan’s more experienced campaigners, Tyreik Wright, misses the first game through suspension. Festy Ebosele, part of Ireland’s squad at the Euro Under-17 finals in May, could claim the vacancy on the right wing.

"We met up in London, had a full day of travelling on Wednesday, so had a few tired bodies on Thursday and had to be careful with the training workload," explained Mohan about their preparations.

"We intensified training on Friday and Saturday but tonight’s session will be light.

"The players have to be fresh mentally and physically for the opening game but they’ll be ready for it. The countdown is on."

Watch all the Republic of Ireland's games at the UEFA European Under-19 Championships - Norway (3.45, Monday), France (6pm,Thursday) and Czech Republic (6pm, Sunday) - live on RTÉ2.