Everton's Idrissa Gueye fired Senegal into the semi-finals of the Africa Cup of Nations by sealing a 1-0 win over 10-man Benin.

The midfielder struck after 69 minutes before Olivier Verdon was dismissed for Benin late on.

Senegal progressed in Cairo despite Sadio Mane having two goals disallowed for offside by VAR, which had been introduced for the quarter-finals.

Aliou Cisse's side will meet Madagascar or Tunisia in the last four on Sunday in Cairo as they try to win the competition for the first time.

Goalkeeper Alfred Gomis almost gifted Benin the lead when he miscontrolled a backpass and saw the ball go wide.

But Gueye won it with 21 minutes left when he ran from deep, swapped passes with Mane and fired in from 12 yards.

Verdon was then sent off with eight minutes remaining for a foul on Gueye. 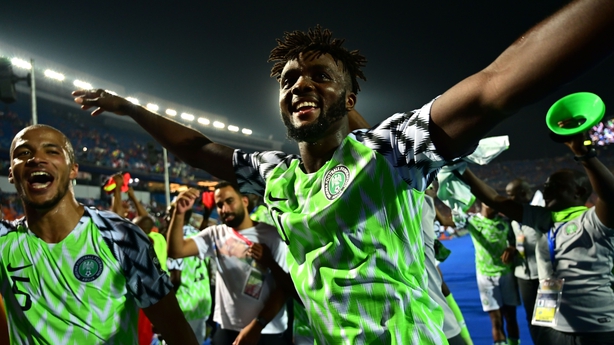 William Troost-Ekong's late strike sent Nigeria into the last four at the expense of South Africa.

The Udinese centre-back struck in the 89th minute to seal a 2-1 win at the Cairo International Stadium.

Samuel Chukwueze opened the scoring for Nigeria in the first half only for Bongani Zungu to level in the second half after VAR intervened.

The Super Eagles will play Ivory Coast or Algeria in the semi-finals in Cairo on Sunday.

Chukwueze opened the scoring after 27 minutes when he linked with Arsenal's Alex Iwobi to score at the second attempt.

Zungu levelled with 20 minutes remaining when he nodded in from a free-kick and it was given after a VAR check showed the ball came off Nigeria's Odion Ighalo before it fell to an initially offside Zungu.

But Nigeria won it with a minute left when goalkeeper Ronwen Williams missed his punch from Moses Simon's corner to allow Troost-Ekong to bundle in the winner.