By Ed Leahy at Oriel Park

Dundalk were held to a scoreless draw by Latvian champions Riga in the Champions League first qualifying round at Oriel Park.

Vinny Perth's side dominated possession throughout but could not make their superiority count against a well-organised, hardworking Riga outfit.

Two Sean Hoare chances in the first half could have given Dundalk something to take to Riga for next week’s return leg, while Perth’s side did at least prevent the Latvians from securing an away goal at Oriel.

The anticipation was evident around the street of Oriel hours ahead of kick-off and the locals were in early to take their seats at the sold out arena.

A rain-sodden surface welcomed the sides but it did not stop the hosts from attempting to get the ball down early, looking to play their default passing game. 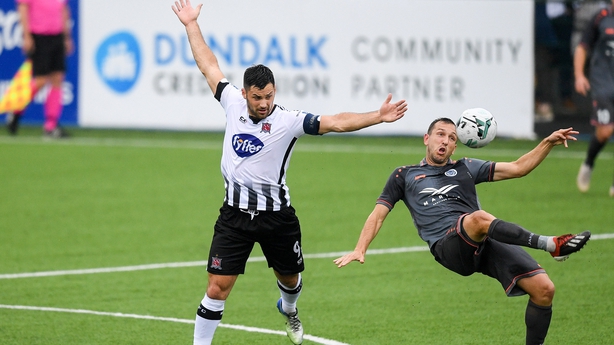 Patrick McEleney was looking to pull the strings in the middle of the park but there was little room to manoeuvre in the packed visitors' half as Riga were happy to sit behind the ball early on.

The Latvian champions appeared to have done their homework on Vinny Perth’s side with ten men behind the ball, leaving striker Roman Debelko to plough a lone furrow up front.

And it took Dundalk just over three minutes to warm up the already vocal crowd as Michael Duffy tried his luck from distance. The attacking midfielder’s shot swerving on approach but just sliding over with Roberts Ozois relieved to see it clear the crossbar.

The visitors eventually looked to run at the Dundalk defence with the awkward but effective Joel Bopesu gliding past a string of players to take the ball into the final third.

The quality was not there to support, however, and Dundalk cleared their lines relatively untroubled.

Brave play by McGrath forced the free as he stuck his head into an incoming high boot in the 20th minute.

Mountney’s resulting free into the box forced a corner which almost led to the opener.

Sean Hoare met the set-piece unchallenged but could only guide his header over the bar. A real chance and one that they might rue later in this tie.

Gannon was then caught by a stray Bopesu arm and another set-piece was awarded just in off the right flank. The Riga midfielder cautioned for his clumsiness.

Hoare was again loitering with intent and his snap shot flew just wide.

'We have to be a bit better in the final third…we lacked a little bit of quality and it was rushed at times' – Dundalk manager Vinny Perth says his team are capable of scoring on the road in Europe #DUNRIG #ucl #rtesoccer pic.twitter.com/25dH46PwMF

McEleney was again on the ball looking forward on the half hour mark as Gannon raced up the flank. Bopesu read the pass and flew towards the half-way line into acres of space.

And for all his guile, the former Derry City man was well able to graft as he spotted the danger, raced 30 yards left and slid in to make the tackle and avert the danger. The challenge drawing the loudest cheer of the night in appreciation of the creative man willing to fight tooth and nail for the cause.

But Riga were growing in confidence and another move forward led to Ojegs Laizans hitting a effort from distance and with the ball bouncing just in front of the keeper, Gary Rogers did well to turn it around the post.

Dundalk remained in the ascendancy for the final 15 minutes of the half and while the Riga defence had done a good marking job on Pat Hoban throughout, the striker had two late chances to open his account.

Hoban was unable to turn Mountney’s cross home in the 41st minute before the centre forward then found himself in space two minutes later. 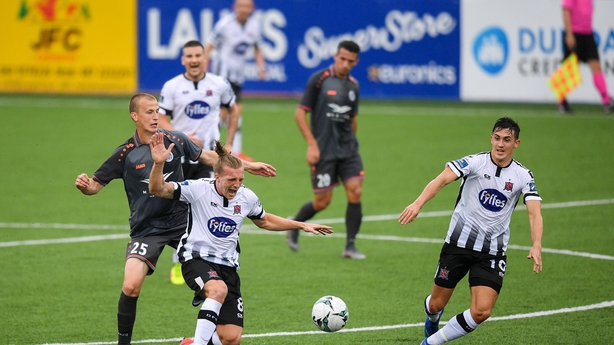 The Galway native connected with Duffy’s ball in from the left, but again the keeper was not tested as the ball dropped over the bar.

With half-time approaching, Chris Shields and Daniel Cleary clashed heads with both players looking to clear a dropping ball.

Shields came off worst of the two and needed medical attention, but the tough-tackling midfielder was back on his feet just in time to hear the half-time whistle.

But Shields would not return for the second half as Andy Boyle was sent on in his place, pushing Hoare up into midfield.

The visitors looked to catch Dundalk cold in the early stages of the second half and Debelko forced Rogers to go full length with a clever shot from distance.

Robbie Benson’s introduction in the 58th minute gave Dundalk a much-needed shot of energy and enthusiasm as the visitors were frustrating their forward play, making the home side look very ordinary at times.

McEleney was not having the desired effect in the middle of the park and his heavily strapped left leg may have been hampering his play.

Jamie McGrath made something out of nothing in the 61st minute as he twisted and turned inside the box to create a shot on target.

'There was a lot of huffing and puffing from Dundalk…but I still expect them to get through'- @alancaw takes positives from Dundalk’s goalless draw with Riga #DUNRIG #ucl #rtesoccer pic.twitter.com/I1Pv3dp6Iz

But the forward’s effort lacked conviction and precision and proved easy for the keeper.

The game had really livened up in the space of five minutes since Benson’s arrival and the crowd responded as Dundalk continued to run at the Riga defence with Dean Jarvis and Duffy dominating down the left flank.

Yet still the visitors continued to frustrate and were now happy to push on into the space left inside the Dundalk half, in search of a priceless away goal.

And a 75th-minute counterattack almost had the desired effect as Riga spread the ball quickly up and across the pitch with Bopesu beating Gannon for pace but his near-post shot failed to test Rogers.

Moments later Aleksejs Visnakovs found himself in space at the back post but the midfielder dwelt too long on the ball before his half-hit shot was cleared, albeit with the suspicion of a hand-ball that was not noticed by the referee.

Dundalk again kicked into gear with ten minutes remaining as Hoare burst through the middle before playing the deftest of chips right into the path of the arriving Gannon. But not for the first time, the ball into the box was hurried and promptly cleared.

An 82nd minute shot from distance was the best Dundalk could manage as the game entered the latter stages with Duffy’s sliced effort always flying away from the far post.

And for all Dundalk’s attacking intentions, Riga saw the game through to the 90thminute relatively untroubled with another Hoare header easily gathered by the keeper.

With just seconds remaining Riga found themselves with a free-kick on the edge of the box following a mis-timed and ill-judged Jarvis challenge.

But substitute Deniss Rakels effort curled into the side-netting to leave the tie at parity heading to Riga for next week’s decider.