The Republic of Ireland will face back-to-back Women's World Cup winners the USA in a glamour friendly at the Rose Bowl Stadium next month.

It will be the first of a five-game victory tour for Jill Ellis' all-conquering side, and the first game Ireland will play since Colin Bell left his managerial post for a role with Huddersfield Town.

Ireland will travel to California for the showpiece clash on Saturday, 3 August.

The game will take place at 7pm local time (3am Irish time) and will be the Americans' first match on home soil since their success in France. 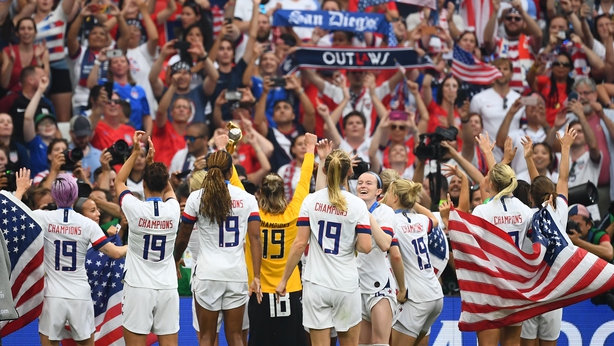 It will be only the third time that the USA Women’s team has played at the 91,000-capacity Rose Bowl, and it's an occasion that's certain to draw a bumper crowd.

After their 2015 World Cup victory, Ellis's troops teed up what was effectively a homecoming celebration against Costa Rica at Heinz Field, home of the NFL's Pittsburgh Steelers.

They thumped the Costa Ricans 8-0 in front of 44,028 fans, the largest ever standalone crowd to watch the USA women in a friendly.

For Ireland, who kick off their Euro 2021 qualification against Montenegro on 3 September in Tallaght, it's the chance to tune up for a big autumn.

"It's a great opportunity for us to be asked to go over to play the USA," said Ireland captain Katie McCabe.

"It will be great preparation for us to test ourselves against the best in the world ahead of our European Championships campaign. Also, it will be good to get the squad back together after not having seen each other in a while. It will all help towards getting us ready for the [Montenegro] game."