US President Donald Trump joined the chorus of praise for the women's national soccer team in the wake of their World Cup triumph on Sunday just days after a spat with the captain.

"Congratulations to the U.S. Women's Soccer Team on winning the World Cup! Great and exciting play. America is proud of you all!" tweeted Trump, who had exchanged barbs with player of the tournament Megan Rapinoe during the finals in France.

After Rapinoe, who led her side to victory on Sunday, told a reporter last month she would not go to the White House if the team were invited, Trump fired off a series of tweets saying: "Megan should WIN first before she TALKS! Finish the job!...

"Megan should never disrespect our Country, the White House, or our Flag, especially since so much has been done for her & the team. Be proud of the Flag that you wear. The USA is doing GREAT!"

He went on to promise a White House invitation to the team "win or lose."

Congratulations to the U.S. Women's Soccer Team on winning the World Cup! Great and exciting play. America is proud of you all!

The United States duly claimed their fourth World Cup title with a 2-0 victory over the Netherlands in Lyon, with goals from Rapinoe and Rose Lavelle.

Former US presidents Barack Obama and Bill Clinton also tweeted their the congratulations to the US team, along with numerous other politicians, athletes and celebrities.

But Trump's dispute with Rapinoe has raised doubts about whether the team will get a formal White House invitation.

English-born US national team coach Jill Ellis said after Sunday's final that she wasn't counting on it.

"I haven't been invited (and) I wouldn't bet on that," she said. 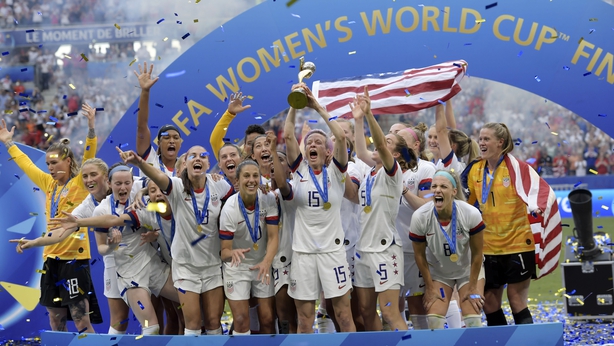 Meanwhile, Rapinoe declared it was time for the conversation about pay in women's football to move "forward to the next step" after she helped the United States retain their World Cup title.

The holders' 2-0 victory over Holland in the final in Lyon saw Rapinoe score the opener with a coolly converted 61st-minute penalty before Rose Lavelle added a fine strike eight minutes later.

On the eve of the match Rapinoe had spoken at a pre-match press conference about the gap in prize money between the men's and women's World Cups.

On Sunday the 34-year-old was asked what she thought about chants of 'equal pay' and boos for FIFA president Gianni Infantino from the crowd after the game.

And Rapinoe - who ended up with the tournament's Golden Boot for top scorer and Golden Ball award for best player - said: "I think everyone is ready for this conversation to move to the next step.

"I think we're done with the 'are we worth this, should we have equal pay, are the markets the same?'

"We put on, every player at this World Cup, the most incredible show that you could ever ask for and we can't do anything more to impress more, to be better ambassadors, to take on more, to play better, to do anything.

"It's time to move that conversation forward to the next step."

She added: "And a little public shame never hurt anyone right? So I'm down with the boos."

US boss Jill Ellis hailed Rapinoe after the final, saying: "I think Megan was built for this, built for these moments, built to be a spokesperson for others.

"She speaks well, from her heart. I think we need people like that in the game, to be honest, to call things for what they are.

"I think almost the bigger the spotlight the more she shines. Sometimes spotlights can burn people but I think for Megan it just highlights who she is."